Our friend Ari met up with us yesterday. He will be joining us for a week or two as we go through eastern Europe. Spontaneity is the fruit of fun-employment so we will see how long he stays.  Last night and today we got a feel for the lower old town of Zagreb. Plan is to take off for Budapest tomorrow.

The lower town is more commercialized then the upper old town. It has lots of stores, restaurants, and bars. The shopping is mostly mainstream stores and off brand designer clothing stores. The restaurants in the area are mostly Croatian or western themed restaurants with nice out door seating areas on the stone streets. There is also the occasional Indian restaurant in the area. The bars are most interesting. There is a J.R.R. Tolkien themed bar whose walls are lined with medieval weapons. It wasn’t all commercial. 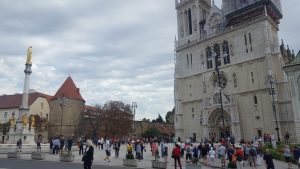 It wasn’t all commercial though. There was also a plaza, pictured to the right, with a massive catholic church. The people in the lower town did not appear to worship Mario Kart like those in the upper town.  The coolest part of this plaza for me is that red circular tower with attached wall towards the left of the picture.  It looks sort of like Gargamils castle from “The Smurfs.” Apparently that is part of the old city wall, or maybe monastery wall. I forget which t is. I just know it looks really old and there isn’t much of it left, but its cool that there is this one section.

As for local culture and feel the lower town some fun surprises. The first would be all the people walking around in traditional garb. There are people participating in pomp and circumstance ceremonies, giving tours, selling trinkets, making music, and posing for pictures with those who ask. The traditional garb, like all of Croatia’s architecture, seems to be mostly bleach white with read trim. 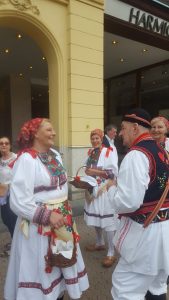 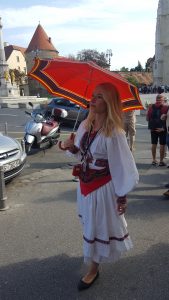 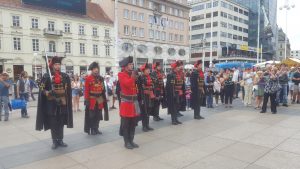 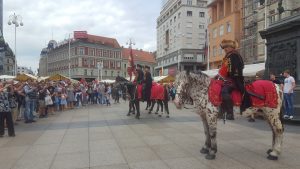 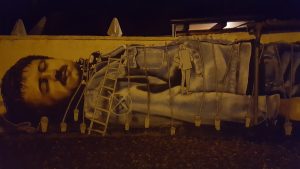 There was some amazing street art pieces such as this Gullivers Travelers mural. I mentioned in an earlier post the further east you go the more interesting and prominent the street art and graffiti seems to get. 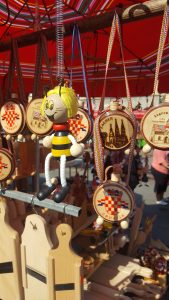 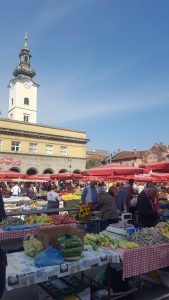 Lastly in the old lower town had a farmers and craft market with people selling their wares. It appears to be berry season and there are all sorts of berries I have never heard of. Many of them blackberry or cranberry-esc. As you know if you’ve read from the begining I’m writting this blog entry in retrospect so i can state this was the start of our berry exploration that only got crazier when i got to the Baltics.

Lastly i do want to mention what is just outside of the old town. Just outside of the old town there is a “mall” area reminisce of the mall area in washington DC in front of the white house.  Its essential a long skinny part that covers 10 or 15 city blocks in length and 2 or 3 city blocks wide.  it houses museums, flowers, statues, trees, fountains, and is used for special events.  The main image for this blog entry is the mall. While we where there they also had a Film and food festival that took place on the northern end of the mall. The films were all in ‘not english’ without english subtitles so we quickly got distracted and stopped watching.The food stands however were great; porchetta sandwiches, beer, seafood, American BBQ, among others. Needless to say we did not get distracted from eating and happily ate the night away.