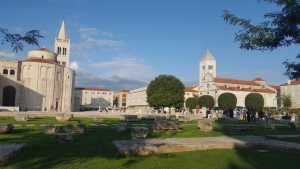 Zadar is an ocean side beach town that is less visited then the other beach towns in Croatia. This is despite the fact that it is the “oldest continually occupied city” in all of Croatia. It is a scenic town filled with pristine white roads and buildings, lots of ruins, a long water front that transitions from river to sea, and it boast a  sea organ – which I never knew was a thing. Its worth a visit for a day or two if you are taking a trip through Croatia and want a relaxing cosmopolitan oceanside vibe without throngs of tourist.

The highlight of the town for me was the sea organ. I thought you’d all appreciate hearing its eerie howl so below is a video of the “sea organ” in action.  Sea organs appear to work by by having the in the tide and waves push air through organic pipes that are buried under the sidewalk. It sounds sort of like what I would assume a pod of whales would sound like. but I would understand if the sound was uncomfortable for people to listen to. Still, the concept is really cool. I imagine you could build similar “organs” that play on wind through a canyon, or geysers, or other natural phenomemon. 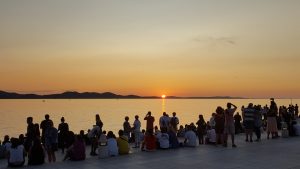 The other aspect of the sea organ that made it a highlight is that it was accompanied by one of the best and most relaxing sunsets we have seen, EVER. 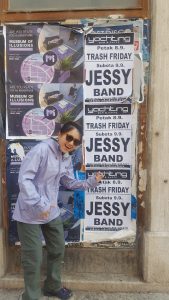 We would have loved to spend more time in Zadar but unfortunately we had to leave without even spending a full a day because Jessy found her inner rocker, started a band, had a show, people got really amped, and then we had to leave town before the riots got too crazy.