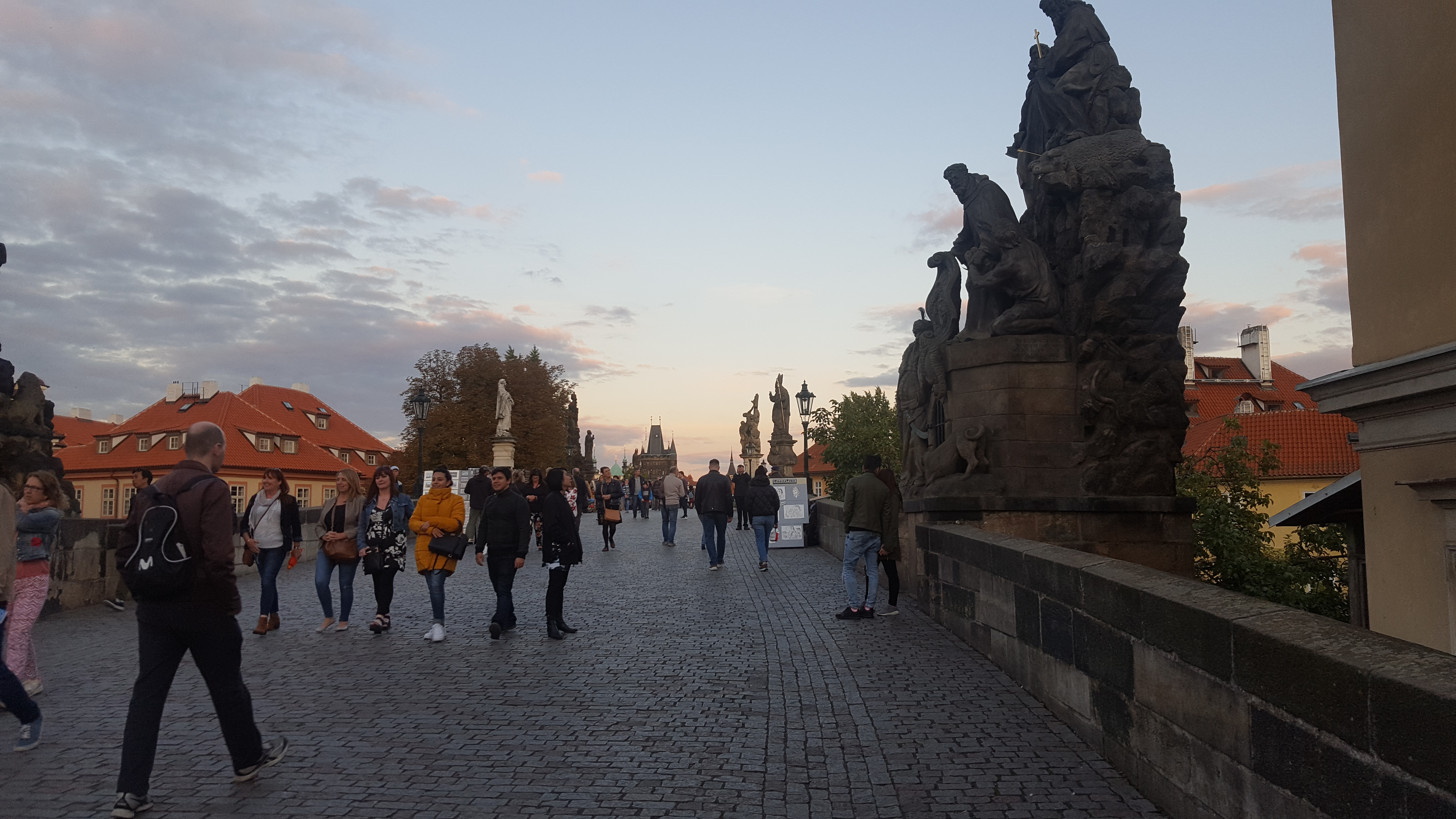 Next stop on our Journey was Prague. Its a city famous from architecture and partying. We arrived about an hour before sunset, walked over to our haunted AirBnB, dropped our stuff off, and then went out to the main old bridge for sunset. It was a great sunset. Jessy looked amazing in the light and Ari got some good Tinder pictures. I just tried not to ruin Jessy’s pictures with my disheveled backpacker look. 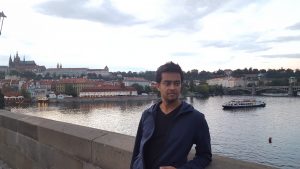 The first impression of Prague was similar to what you would think Bram Stroker’s Transylvania would look like. A dark brownish red  brick bridge filled with religious artifacts. A lower town filled with grand squares, and mazes of small winding cobblestone streets that easily go from crowded to desolate, perfect for a vampire attack. Lastly in the distance on top of a hill a majestic and mysterious castle. If you are a fan of the blade series it also had 5 story EDM clubs with hidden corners, perfect for the modern young vampire to meet victims.

Vacationing in Prague means a lot of time on your feet. This means walking, a lot of it up hill since the main sights on on the cities highest point. This means meandering through the winding streets. This means dancing or standing in one of the many clubs or bar. For many it even means getting tricked into walking more then you expect. The first night we briefly explored Prague after sunset then quickly retired to bed. On our second day we spent the whole time on our feet. We walked the old town near the river, then trekked up the to the hilltop castle area were there are a number of churches and museums. We walked into what we thought was the entrance for the church, paid the fare, and then were directed to a staircase that we thought would go to the chapel section. It ended up being 825 steps up the tower with no access to the main church. It was not the entrance to the church, just the church’s bell tower. There was no warning. On the way up we passed many people, young and old, struggling with the climb.  The rewards for completing it were sweeping views of the city, a sense of accomplishment, and some joy watching the doorway and the looks of anguish on the new arrivals as they completed the climb. The downside for making the trek up was that it then required 835 steps downward to make it out, and it resulted in the annoyance of my wife who was already tired from walking all day. After that climb she went off to find some Starbucks to recharge before we walked down the mountain. I went and explored a few more churches before going to join Jessy who instead of Starbucks had found some Gluvine, hot german winter wine, and was happily chatting with another traveling older couple. Prague = lots of walking. 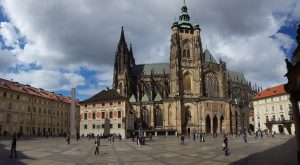 That night we went to a cocktail bar called Anonymous. For those New Yorkers it is like Barcelona bar for mixed drinks. The bartenders all were Anonymous mask, like the hacker group, and their cocktails involve some special glass, fire, tricks, props, or costumes. The drinks may have a gimmick to them, but they are not gimmicky drinks. They are legit cocktails. Being a speak easy in the condensed old town it was hard to find and took some more walking. By the time we arrived Jessy was not speak(ing)-easy to me. “I’m so mad, arg, my feet are tired I don’t want to walk. This place is stupid”, she quipped. That was until she discovered that if she used a black light on the menu there were secret drinks she could choose from. Then she discovered other secret menus like one where she could pick a drink by choosing a scent from a perfume box. Them we all got Grogs and spent lots of money drinking gin out of grenades, playing with fire, drinking absinth from a syringe, and other unique cocktails.. No more argue, although  still had to pay the bill to repent for all the days walking.  After which we went to the nearby 5 story club, which wasn’t as cool as the hype, but fun it was fun none-the-less to do a little booty shaking. 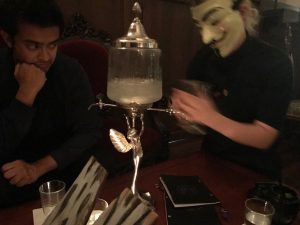 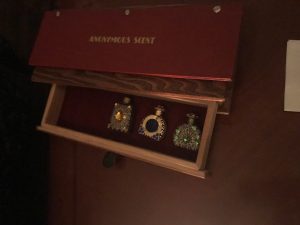 So that was Prague, a hard partying city with lots of ornate churches and lots of walking. Off to our next party in Munich, Oktoberfest.