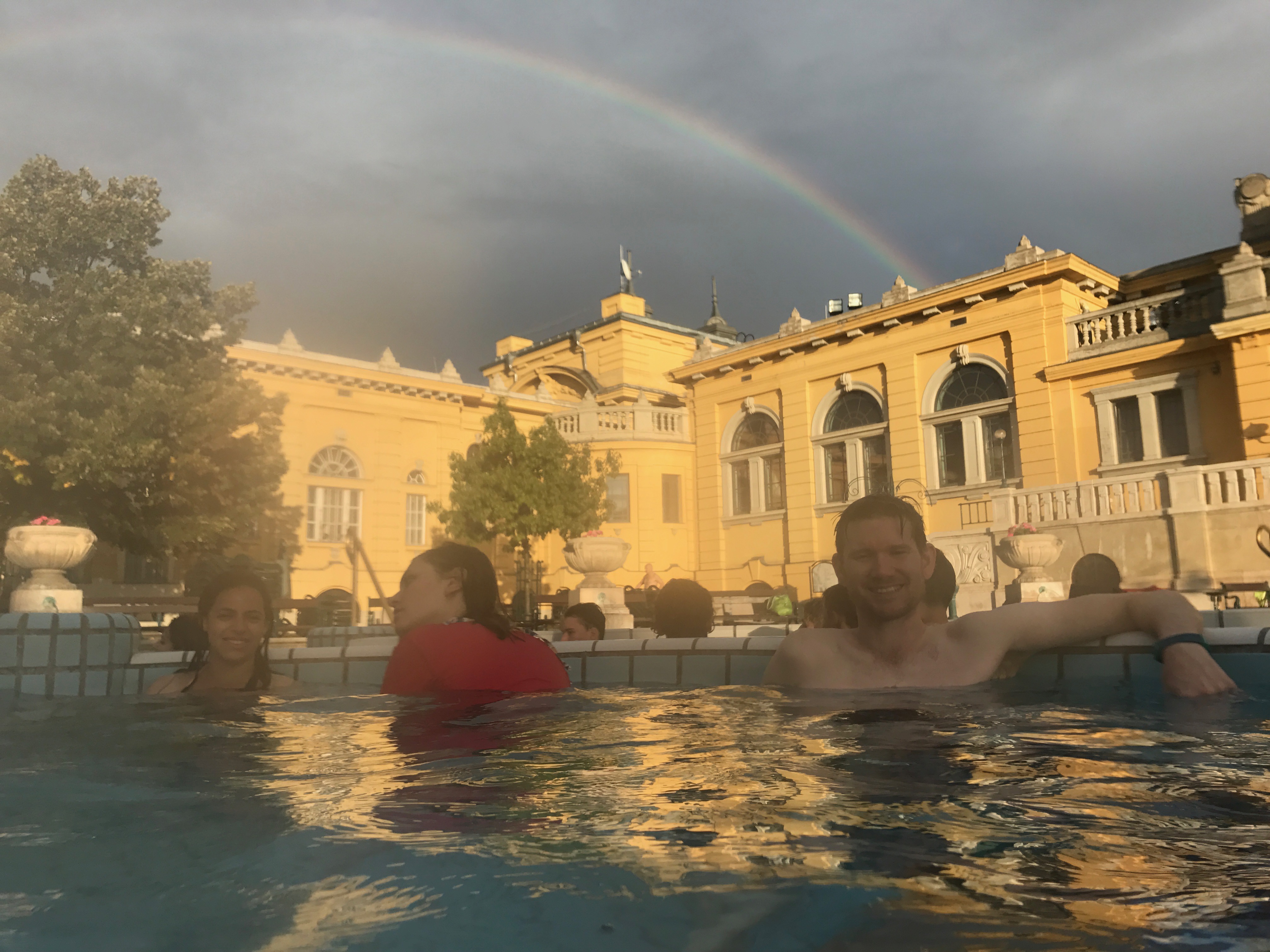 So the last post was the dark side of Budapest. However that darkness is like shadows at noon – minimal when compared to all the brightness and greatness that Budapest has to offer. I’ll break down some highlights for you in this blog post.

Get a Grueling Work out at Gellért Hill 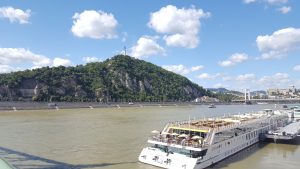 Ari and I started our day by taking what we thought would be a nice walk up Gellért hill.  The hill is situated on the Buda side of the Danube. It was directly across the river from our AirBnB, and there was a monument on top of it that looked like it would offer sweeping views of the city and river.  Jessy opted out since she doesn’t like walking that much, and decided to go look for a place to buy new glasses. Probably a smart move on her part since the hill turned out to be more like a mountain and its where the gypsy swindled my money. That withstanding it was a great time and a great workout. Ari got some great Tinder worthy photos out of it.

The hill itself as mentioned above is on the Buda(west) side of the Danube. At the southern base of the hill, where Ari and I started from is a thermal spa and church that is actually made out of caves and tunnels in the hill itself. North of the hill is Buda Castle, which is on its own hill. The hill itself is forested and covered with a maze works of walking paths. The journey up the hill is a mental exercise to find the proper way up to the top, and a physical exercise due to the steepness of the slope. One of the cooler aspects of the walk was that there was a playground build into the hill with literal slides that looked more like bobsled tracks resting at ground level using the slope of the hill to create the slide. 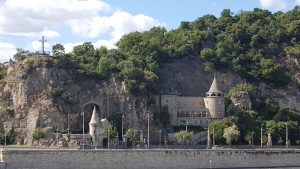 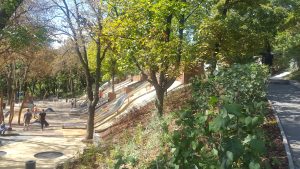 Once towards the top of the hill you get sweeping views of the Danube river, the famous bridges of Budapest, and all a view of all of Pest. We took a few minutes to rest, drink some water, enjoy the fort and the war monument at the top before heading down the northern slope to get to Buda Castle. On a side note if you find yourself in Budapest I think going up the northern slope would have been easier then the southern slope that Ari and I took. 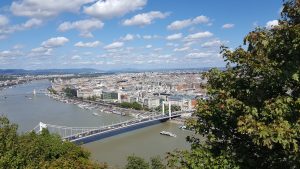 Be Stunned in Aww and Fear At Buda Castle

After descending Gellért Hill, Ari and I decided to head to Buda Castle. Jessy had been there before while she studied abroad and recommended we check it out. It was a bit of a walk and another hill to climb, but this hill was actually what you would think of one someone says hill – not too steep, not too tall. It even had an escalator for part of the ascent to make it that much easier.

The Buda castle area itself was like a mini city. It had the castle that looked classic 1800’s architecture. It had a little village surrounding the Castle mostly filled with tourist shops and restaurants. Lastly, it had an accompanying ornate church. The entire area had many examples of artistic statues and fountains, and the palace itself contained a museum which I’m certain had more outstanding art. Overall lot’s to aww.  Being the art buffs that Ari and I are not, and having limited time until we had to meet Jessy we decided not to go into the castle. Instead we trekked to a sight whose intrique and mystery attracted us more. The underground dungeons of Dracula.

Here’s the fear. It turns out the famous count and the king, Matthias Corvinus, had some sort of relationship. In fact Vlad was married to the kings cousin.  I don’t know too much of the history but what I gather is Politics suck the famous Dracula got arrested on trumped up charges and was impressioned for 14 or so years.

What is frightening is the prison itself. The entrance to the prison is and unassuming house door that holds a staircase that descends into the hillside and into the network of cave tunnels that make up the prison. There is the sound of dripping water. The tunnels themselves are moist from rain and ground water in the area. This water causes a musty smell, a thick blanket of fog in some areas of the tunnel, and a fear that the ceilings may be weakening. The fog adds a mysterious haunting effect in areas were it is well light enough to see it. In other areas there are no lights and it is blacker then anything you have likely experienced and you have to blindly walk with your hand on a rope, or a wall.

The exhibits themselves are unintentionally frightening. In some of the old cells they have scenes from the 1700’s. Lavish parties, opera’s, kings coronation, and the like. However the clothing is old, and due to the moister and fog almost rotting giving the scenes an almost zombi-esc feel.

A City of Thermal Baths and Art

Budapest is a city of parks,  architecture,  statues, and spas. For architecture just walk anywhere in the city and you’ll something interesting. It was on of the few places we’ve gone were Jessy did not complain when having to walk around. In fact after getting ripped off from the cab driver she asked to walk when I wanted to take a cab. For those that don’t know Jessy that’s significant. It means its a very enjoyable walkable city with sights everywhere, a treasure box for architecture lovers.

One of the main areas of art that we went to was the “New York Cafe”. It was the place to be if you were a writer in the early 20th century. It bills itself as the most beautiful cafe in the world. I doubt that is true, but I would not be surprised if its top 10. The ceilings all have murals painted, the walls and chandeliers of designs etched with gold leaf, there is a piano player playing classical music, and they have a roped off line area to get in, and the food was surprisingly delicious. Thankfully the one thing they did not have was a dress code and they let us 3 back packers in. 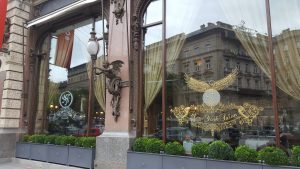 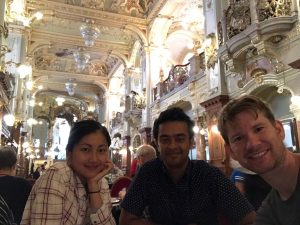 That was the cafe, but the spa’s where were it is at. Budapest boast thermal bath-houses that would make most emperors jealous, and they are open to the public. The spas generally would have one to three large outdoor baths complete romanesc statues, current pools, and jets. They include abundant smaller indoor baths of varying warm temperatures, and ice baths were you can test your metal.  They include various suanas with heat, scent, oils. The spa we went to was “Széchenyi Spa”. We spent about 5 hours there, mostly in the outdoor baths. It was beautiful. We got to enjoy relax our mustles, enjoy a surprise rainbow, enjoy the sunset, and enjoy some brews. It was a great romantic break from the rapid traveling. 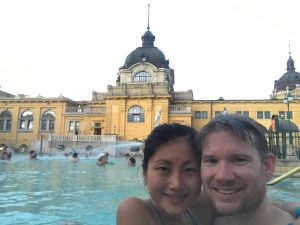 There is so much more to budapest then I can type, but one last topic I want to touch on is the boat cruise. Tim, Suyan, Rob, and Julia stopped by Budapest after Yacht week and we all took a night river cruise together. In retrospect I am surprised they went for it after being on a boat in the Adriatic for a week prior. Regardless we wore some sweaters, had some champagne, and watched the world roll by as we cruised past the river side palaces, churchs, spas, and general ornate buildings. The reason I want to bring it up instead of the grunge clubs, or scooter, or churches or whatever other fun we had is because of the bats. Yes, bats. Perhaps the most spectacular sight our three days was the 50 or 60 golden bats, light by the church lights, circling the bell tower. It looked like a golden snowstorm.

Anyways, so long to Budapest.. next stop Vienna