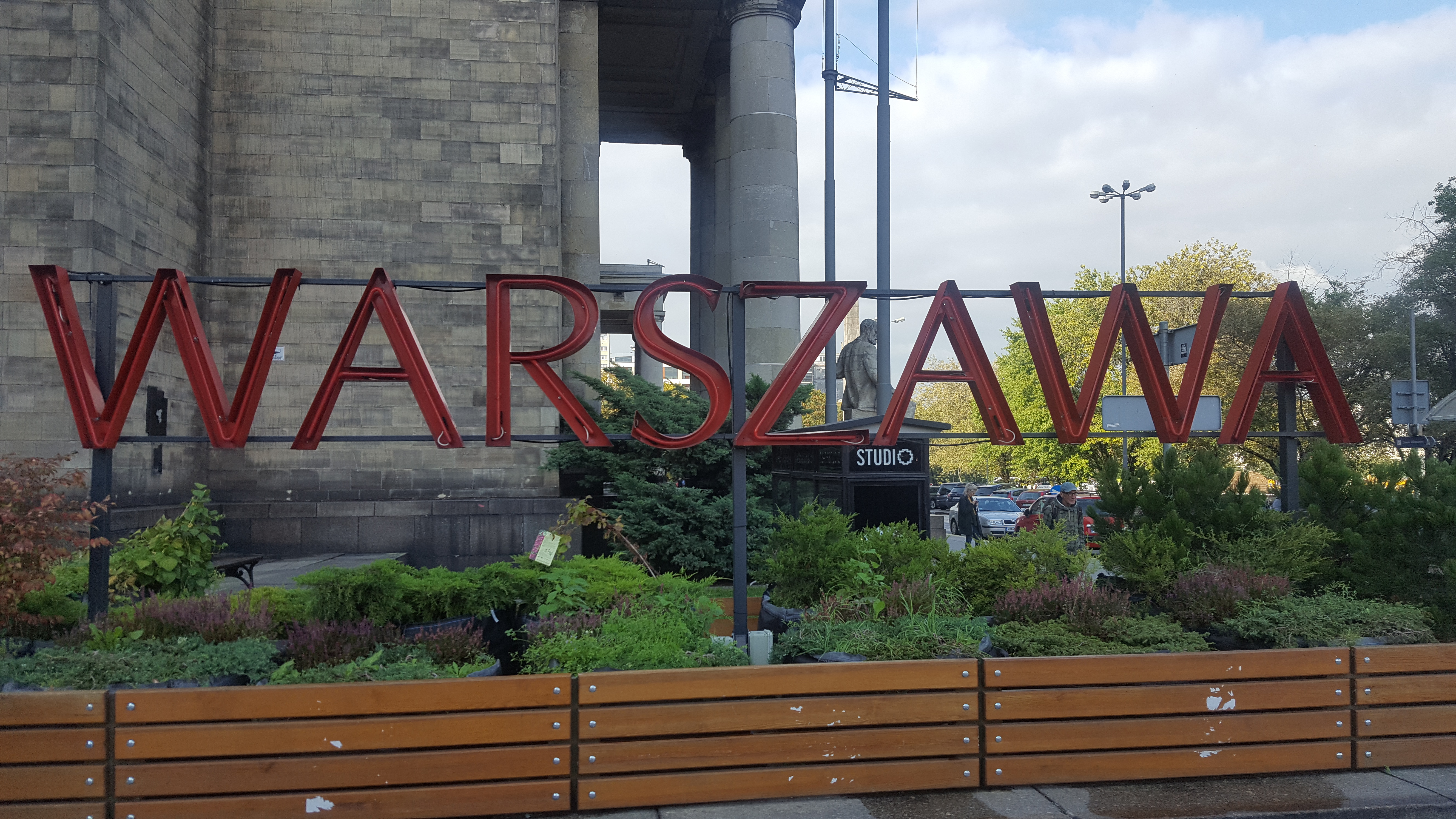 Warsaw, a city in eastern Europe most associated with atrocities against Jews in World War II. Being there and seeing the amazing Museum of Polish Jews( POLIN) is a sobering experience, especially considering the way our government is trying to treat muslims. Just writing this entry in retrospect feels me with sorrow, but I’ll come back to that and start on a higher note since it is our honeymoon and the first leg where Jessy and I are alone. Ari left us after Munich and just Jessy and I flew to Warsaw since we wanted to go to the Baltics and had a specific date we needed to be in Russia so didn’t have time to take a train. 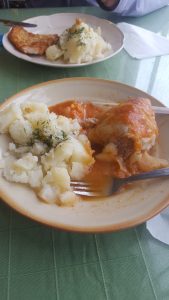 The trip started off with a laugh. We grabbed an Taxi to to get us from the Airport to our AirBnB. The driver must have thought it was somewhere else because he was telling us what a nice area we were going to, and how the area we were driving through at the moment was really bad, with old public houseing communist buildings. Just then Jessy said, “Stop we are here”. It cracks me up just thinking how the driver must have felt. It was an old soviet communist concrete building, but that is what we wanted. It was across the street from the Zoo, which was used to hide away many Jews during World War II, and it had one of the best Pizza’s I had in Europe thus far in a restaurant on its first floor. Being a neighborhood building it was a short walk to a cafeteria were we had our first lunch. Cafeteria’s are a stable in this area of the world where you go, order food, pay a cheap price, receive a ticket, then go to the window and pick up your dish. Jessy had a Pierogee, I had boiled cabbage filled with minced meat.

Warsaw itself is a new city. The ghetto was mostly destroyed after it was emptied, and World War II bombs destroyed much of the city.  The old town is a “new old town”, meaning remade, maybe fake. Our AirBnB host was not a fan and recommended we avoid it. We did ignore that warning the first night and went to check it out. It had cobblestone roads, squares and quaint buildings. The roads were definitely wider then other old towns we have seen in Europe, perhaps that was part of the “new” design to accomadate the tourist. I thought it was cute, but admit we did not spend much time there. We spent most of our time tracking down great food like an amazing pierogee restaurant, and walking around looking for traces of the old ghetto and admiring graffiti. 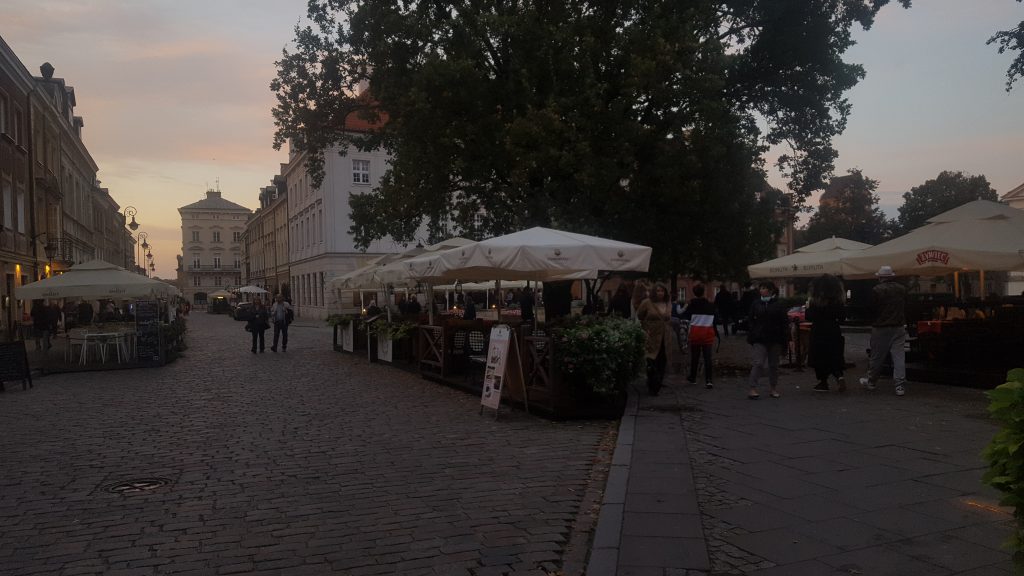 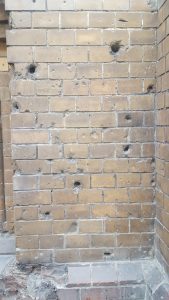 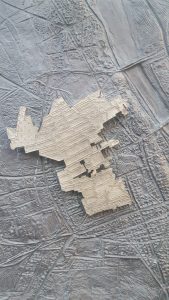 The second Day Jessy felt a bit a sick. Perhaps it was the ghost in the apartment we stayed in. Its the second place in our travels that seemed haunted. In any case she stayed in and rested and I walked around the city by myself. My main mission of the day was to understand more about the history of Warsaw. I started off trying to search for a remanence of the Ghetto. It used to be the largest Jewish Getto in Europe and was a significant portion of Warsaw. Now a days there is barely any evidence it existed. At some portions that used to be the edge of the ghetto you can find a stand and statue that with an iron relief showing how large it used to be as seen below. At the south end I was able to find one peice of remaining wall that is now built into the side of a new building, that is riddled with bullet holes. 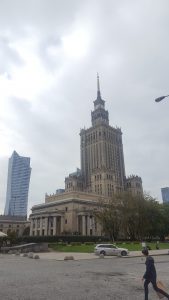 After exploring the south I went to the POLIN, The Museum Of History oF Polish Jews. It covered How Jews came to Europe, how they were treated in Poland up to World War II, and what happened to them during the war. The museum itself if extremely modern and interactive, one of the most intereactive ones I have been to. The information contained in it seems to be mostly factual, though the “ancient” history is Torah based and may or may not be factual. That said the take-aways I found most interesting were from the middle ages to the present. Those takeaways were. 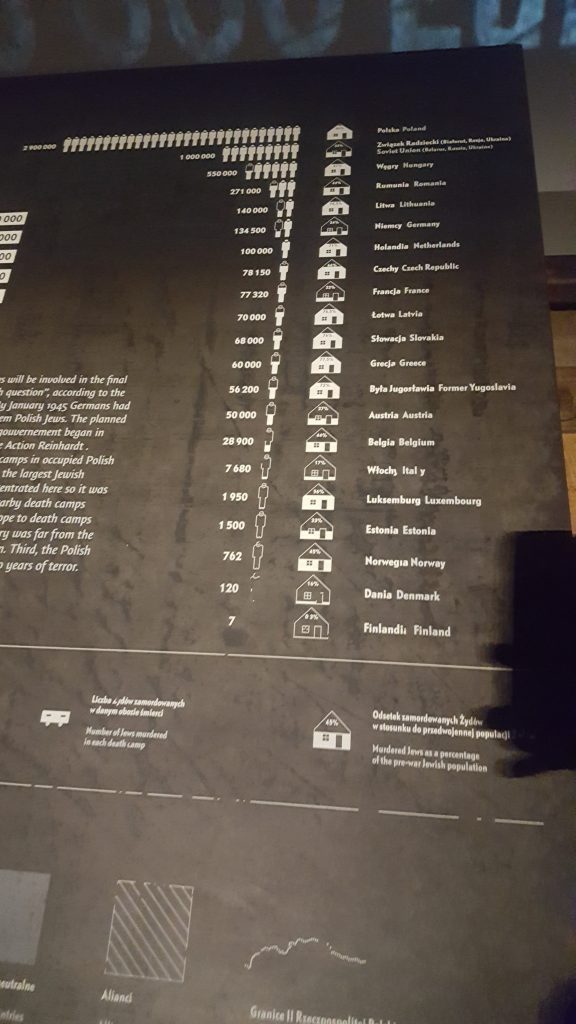