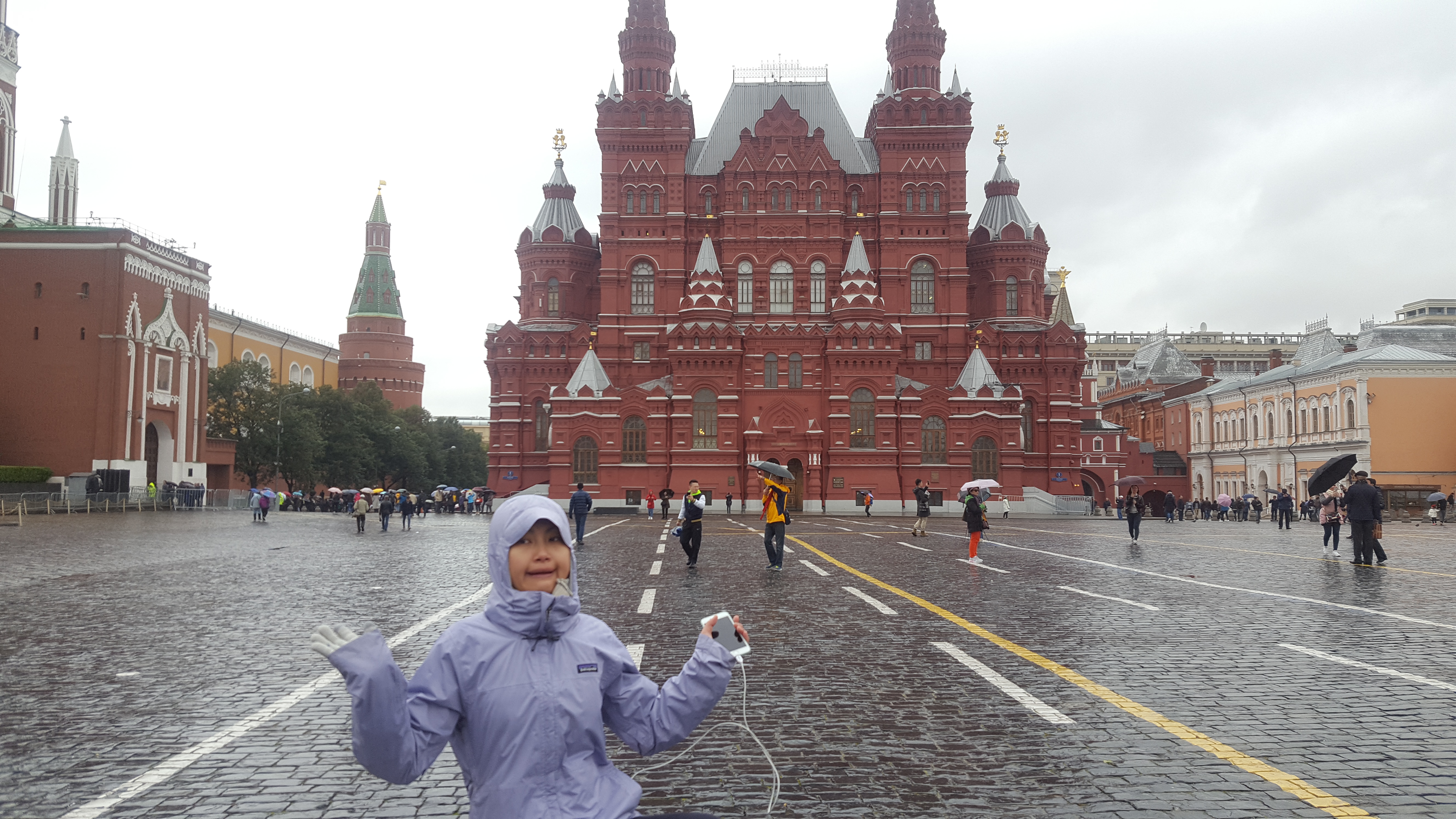 We took a sleeper train from St Petersburg to Moscow, and then spent 3 full days in the city, one of which was Putins birthday. The sleeper train itself was amazing and recommended if you are making the trip. It was the perfect number of hours and was a private room so no neighbors.

The first day we started off by exploring the red square, the State Historical Museum.  I had advised against the museum since it was going to rain in the afternoon and the next day, but I was veto’d. The good news is I got to make good use of the babushka rain poncho that Ari and I bought in Zagreb.

The red square itself was a large black stone square surrounded by red. The red building to the north is the State Historical museum, the Red walls of the Kremlin are to the west, and there is a Red Church to the south. Of course the red square is not named for the red buildings, it is named for communism whose color is red.  Jessy and I danced around the square laughing and having a good time. You can see jessy dancing in front of the museum, and me in front of the church below. 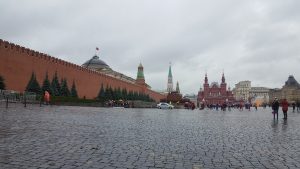 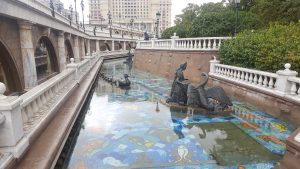 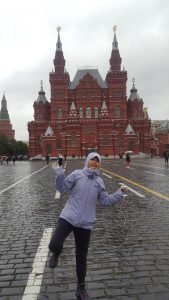 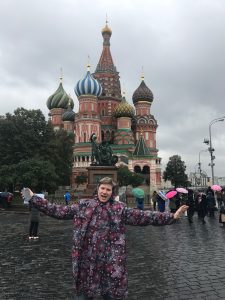 The history museum covered Russian history from prehistory until modern communism. What we found most fascinating about it is that it completely ignored the fact that Mongolia had conquered and ruled a portion of what is now Russia for 200 years. It did have a Mongol burial statue, and this map, which seems to show the Mongols going south of Russia. It also had artwork, books, armor, and otherartifacts from various stages. Jessy’s favorite were the jewels and the crowns. 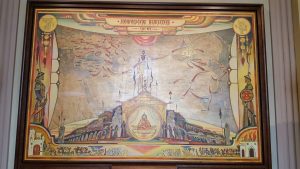 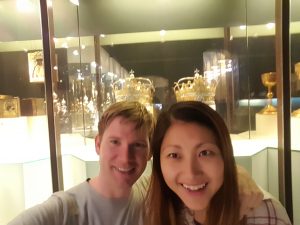 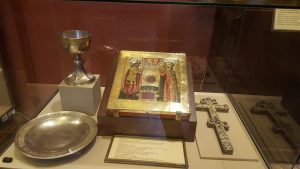 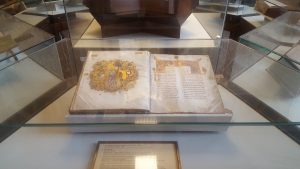 Lastly we took the subway way out to the east to . It is a shopping market and touristy area with a fake Kremlin set up. It was rainy and wet when we got out there so not really worth the trip.

The day before Putin’s birthday was another wet day. We woke up early and went to the Kremlin. Jessy went to stand in line and buy tickets. I went to grab us food from the nearby McDonalds. We spent most of it at the Kremlin.  It was about hour waiting in line after getting the tickets to get in. Inside the Kremlin itself was smaller then expected. There was a museum which we did not go to since we thought it would be similar to the one we saw yesterday. In addition Kremlin had a small square with three or four churches in it. The churches were less ornate the the other churches we had seen, but one of them contained tombs that housed the previous Tsars, including a shrine to the real Dimitry, the Tsar’s son that was the basis for the False Dimitry in the opera we saw. He was deified into a saint.

We also did go to a special diamond exhibit at the museum that made Jessy’s month. It showed Russia’s diamond collection which included raw gems, cut gems, and tsar royal treasures. It also had gold nuggets from around Russia, some larger than a persons head. Since seeing it Jessy has been dreaming of all the jewelry and wishing she should own some of the Russian collection.

We ended the day at an Azerbaijan restaurant and hookah lounge. I want to do a post on Russia’s food since It is pretty delicious and different from what we get stateside, but I want to slip this amazing menu item in this post since it is hilarious. 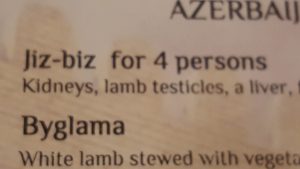 This was Putins Birthday. It was a bright shining day and to celebrate we went to the Ballet. The performance we saw was La Bayadère. What is fascinating about this ballet is that the writer was obsessed with India and wrote this ballet based around an Indian tale. I haven’t seen India portrayed in any western art form before, nor heard of it being portrayed in any. What is also insteresting is that the current version is a shortened version of the original ballet since the originals ending is too dark.

Its a story about an Indian (India Indian) prince, his love affair with a dancer, and the jealous princess that wants to marry the prince. The sets were amazing. We saw a ballet, Cinderella, in San Francisco before our wedding, and with after seeing it and this ballet that Ballet has really upped its game since I was a kid. Again what was  interesting about this is its take on Hindi culture and the choreography  to match. All and all it was a great performance, and a little bit reminiscent of Romeo and Juliet.  Sorry to ruin it but in the shortened version the two main characters die and meet in the underworld/reincarnation line. The longer version has an erupting volcano that kills everyone else in the next scene who drive the lovers to their death. 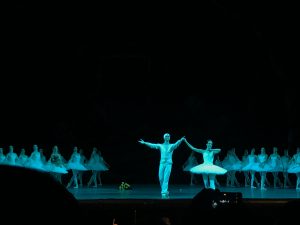 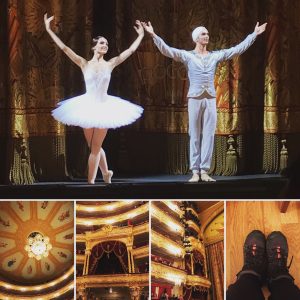 There was one uncomfortable aspect to the play though. The play had little girls from the ballet school play the part of servants. The little girls, probably really proud of their accomplishments, all wore black face and danced around like idiots. The choreography made them dance like idiots, not their abilities. Amazing that that’s OK in Russia.

After leaving the theater we witnessed the most interesting part of our Russian trip, about 40 armed SWAT officers lines up and marching off or getting into vans. You can see it in the image below.  Leaving there and walking down the street there were miles of police lined up on the street, and officer every 4 or 5 feet surrounding the Kremlin. Also in an image below. A quick web search later revealed it was Putin’s birthday, and supporters of his political rival who he jailed and is preventing from running against him had planned a protest in the red square. The officers were there to prevent anyone from going to the red square so a protest could not grow. It was a somber reminder of the inequality and unfairness of Russia, and the type of environment that our current administration seems to admire and try to push into the US. 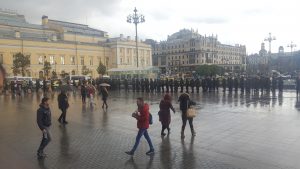 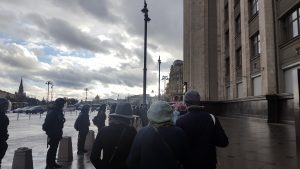 We walkedby all the police officers until they ended and continued westward to the Impressionist Musuem. I love impressionist art. To me it is like painted hazy emotions, and worlds in motion. This museum had a large collection of impressionist pieces, Picasso, and some Russian pop art. Below are some of the pieces that I found most the most interesting. 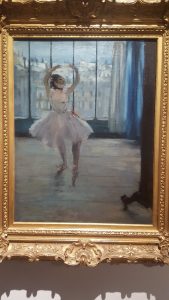 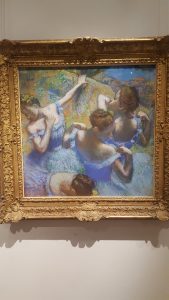 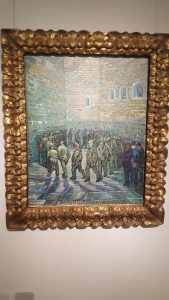 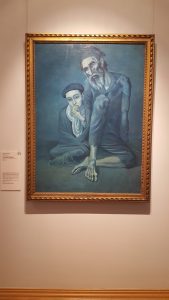 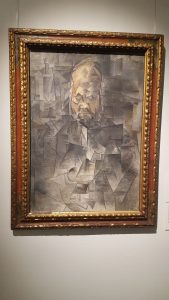 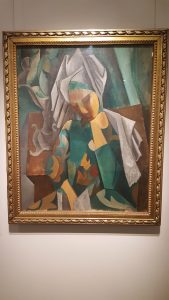 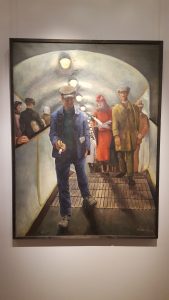 Side Note – An Amazing Subway

One aspect of Russia that really impressed us throughout our stay was the public transportation. We went to one of the worlds deepest subway stations in St Peteresburg while there. It took 10 minutes on an escalator to get to the platform. We also took the subway in Moscow many times, and we took buses in Moscow. There are three aspects that were amazing. First, the punctuality of the trains. They arrived every 2 or 3 minutes, no matter the time of day. Second, the organization of the subway system. It was a relatively short and straight forward trip no matter where you were going. Although there was an exception on Putin’s Birthday when they closed the tracks that went under the Kremlin. Third, the stations themselves were like art masterpiece, each with its own style. Below is a sampling of the stations we saw. 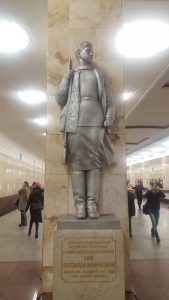 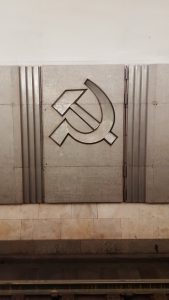 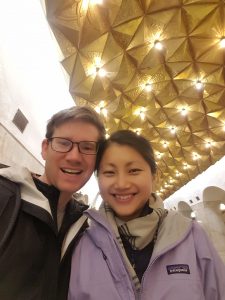 With Russia Over, next stop Mongolia.