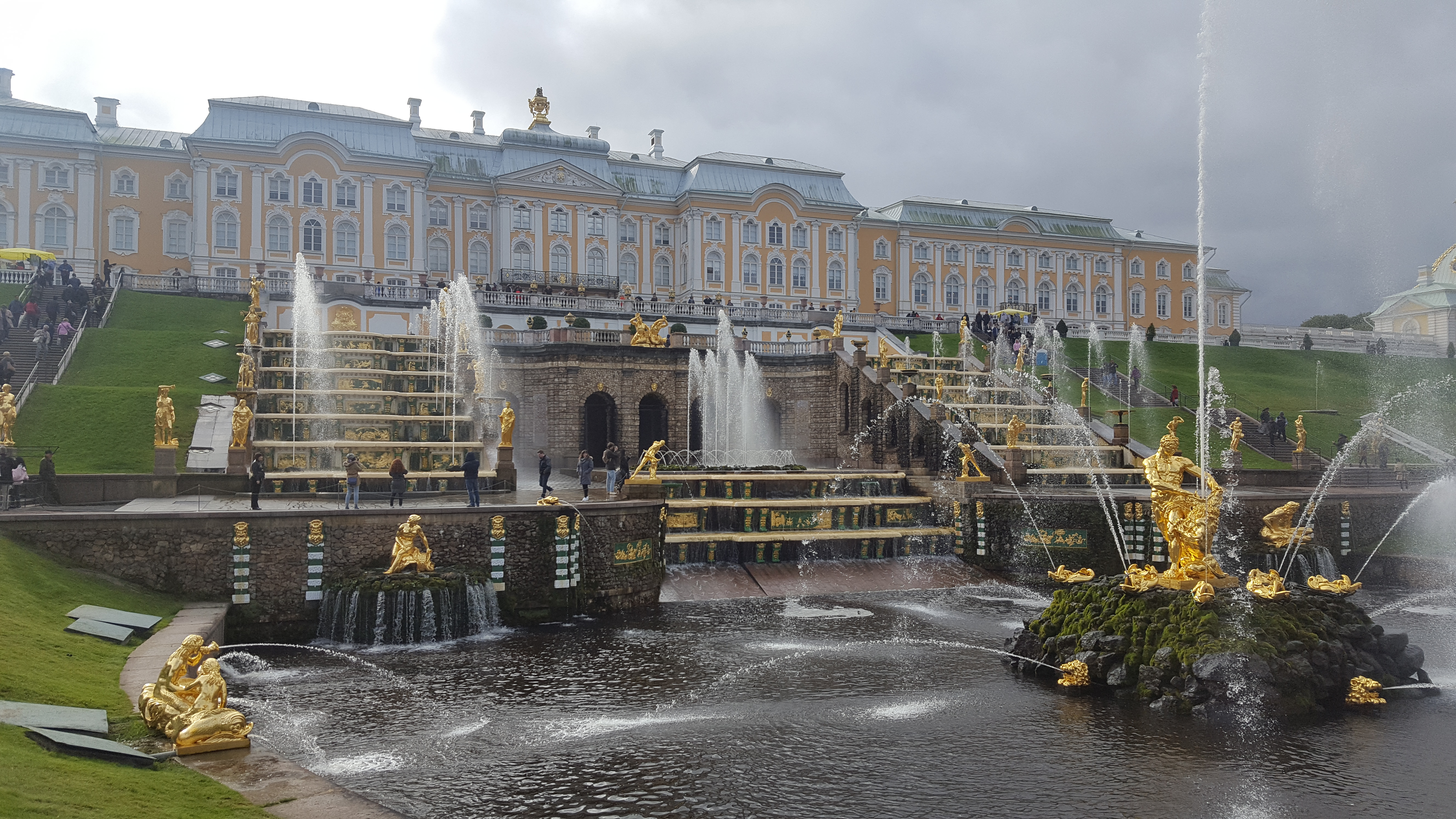 We arrived in Russia last night and went straight to our AirBnB. Our AirBnB is near Hermitage Palace, pictured as the blogs image. The AirBnB was in a complex similar to where we stayed in Vilnius. There is a gate which opens up to a courtyard which is surrounded with apartments. This apartment, like the one in Talinn, also includes a sauna which we used last night to dry our clothes after we washed them.Turns out that although Sauna’s make you wet with sweat they make great driers. 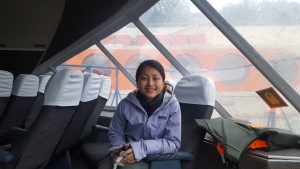 Today we went to Peterhof, the summer palace of Peter the Great. To get to it we took the hydrofoil across the Neva river and the Gulf of Finland. It was a short 30 minutes on the hydrofoil, compared to the hour or two it would have taken on land. If you have never seen a hydro foil before it is a type of speed boat that lifts itself out of the water and glides over it. The picture below shows the boat in action. 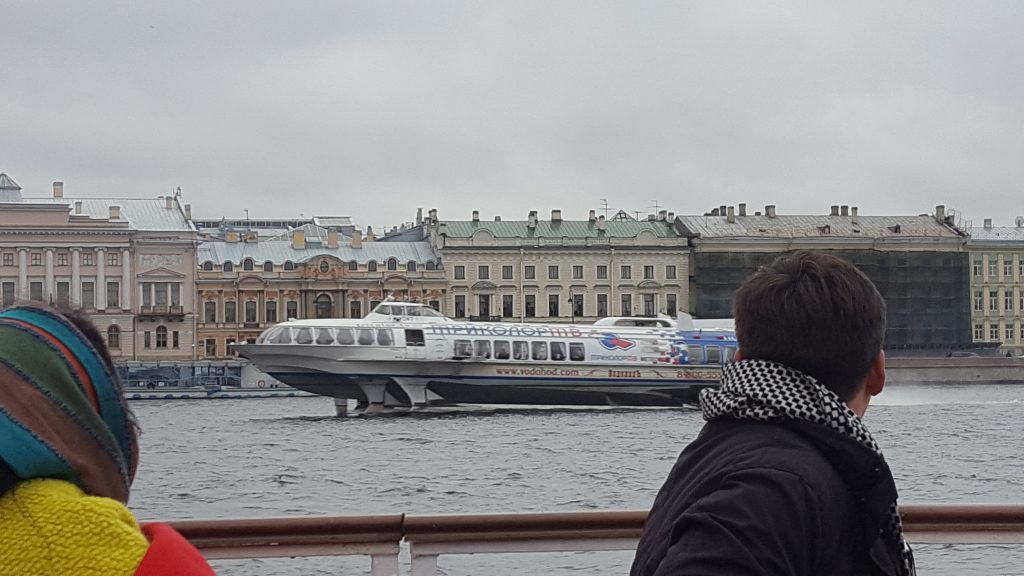 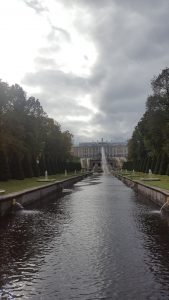 Once at Peterhof we went in through the gate by the boat pier and walked up the canal to the main palace. The canal is lower now than it was in Peter the Great’s day. In his day you could have taken a boat all the way up to the palace, but now a days the canal is too shallow so its a ten minute walk. It is a nice walk up the canal and there are a few bridges across it that help the anticipation build as you approach the palace.

The main palace itself is a pastel yellow and surrounded by a multitude of Golden fountains spewing forth streams of water. We got lucky in that the we arrived just before winter and the fountains were all running. I believe the fountains will be turned off in a few days. We got unlucky though in that we went on a Monday, and on Mondays the main palace museum was closed. Jessy furious about the museum being closed. She directed the entirety of that anger towards me. Still the outside of the main building is beautiful, and the grounds were still open. 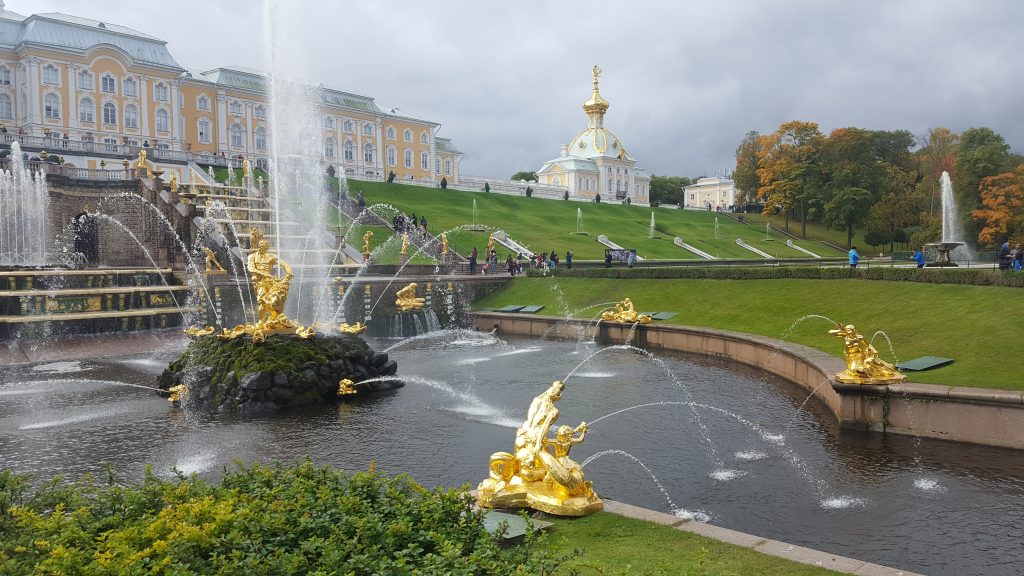 I spent most of the day following Jessy around begging for forgiveness for the main building museum not being open because everything is always my fault. While doing this we explored the grounds. Most of the time wth me a good 10 feet behind Jessy. In retrospect that was probably the fastest she walked on our trip so far. See the image below to see what my view was mostly like. 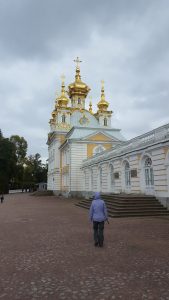 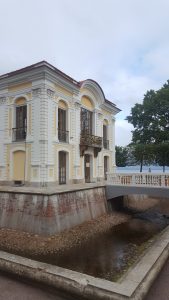 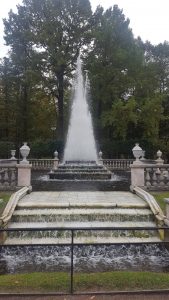 The grounds south of the palace included multiple buildings spread out where various people would have stayed. It includes a vast gardens, a hedge maze, and forested areas that were filled with leaves that are in the middle of changing color. There were some buildings whose museums where open so we did get to peer inside. The inside exhibits were mostly paintings, chinaware, and clocks – most plated in Gold, silver, or ivory. Throughout the grounds there were also multiple fountains some with figures and some just artistically shooting water in interesting patterns like the pyramid fountain pictured below. 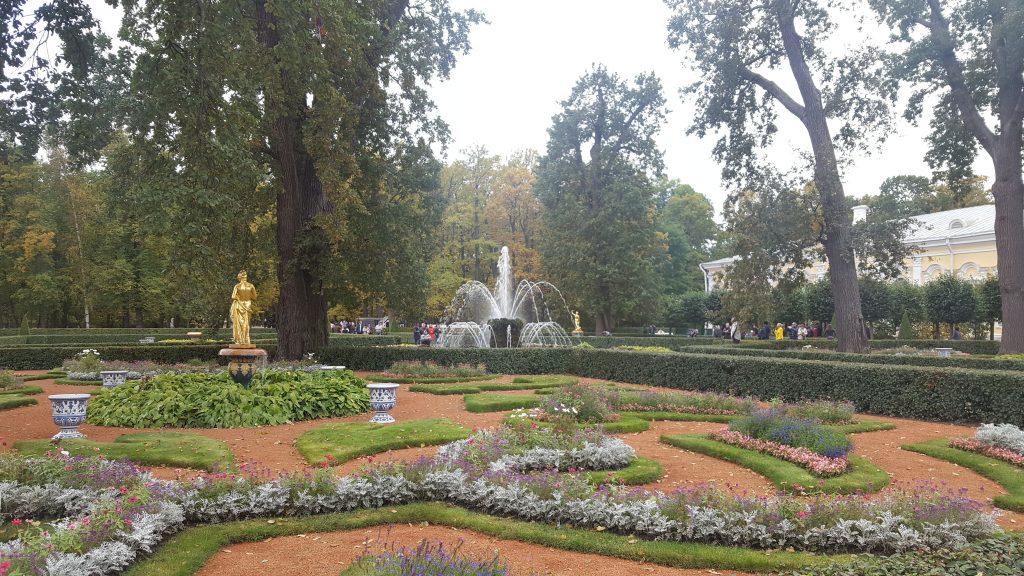 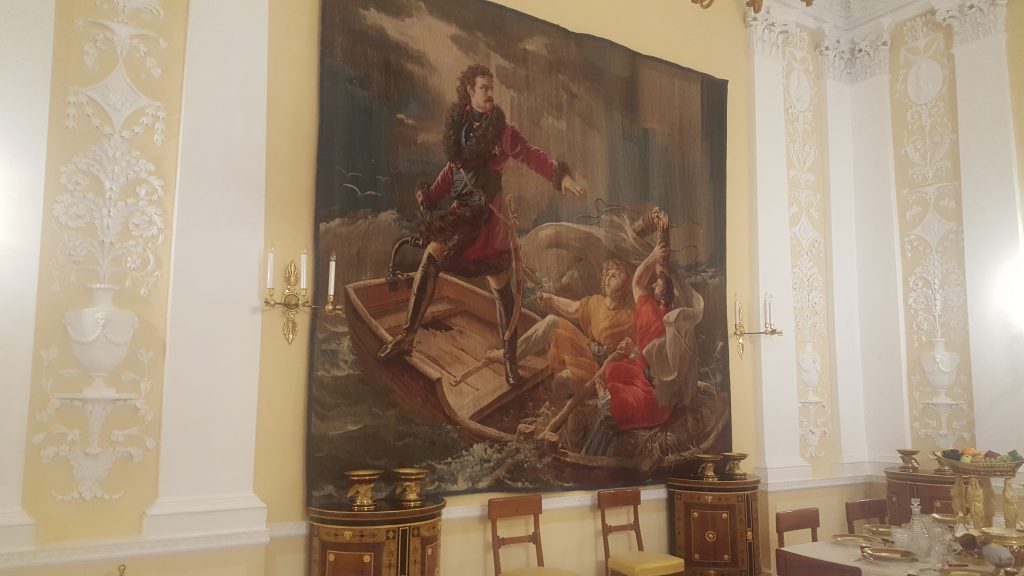 What was strange, and something I wish we would have known is there is also a north garden, but to get to it it requires leaving the south garden and paying another entrance fee, then if you want to return to the south garden re-paying an entry fee to enter. The entry fee is not expensive, but not really that inexpensive. the whole thing seems like a scam to trick people with round trip boat tickets into paying more. If we would have known we would have only gotten a 1 way boat ticket and taken the bus back. That said, there is plenty of walking just in the south garden so you can easily spend a day without heading to the north garden. We did.

So that was Peterhof. The plan for the other 2 days we have in  St Petersburg is going to be eat the local food and check out the variety of arts the city has to offer.