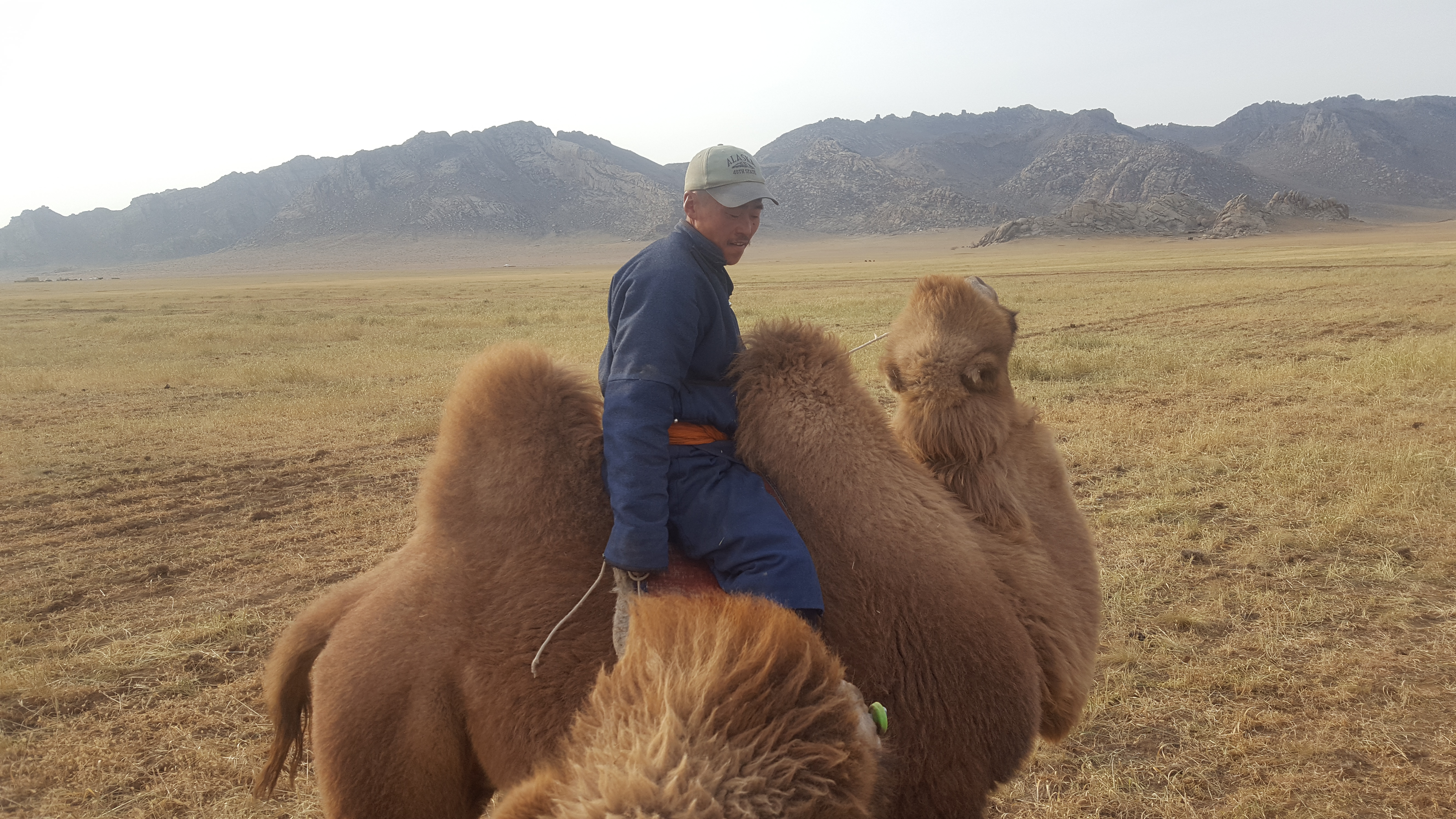 We spent our last night and day with a camel herding family just outside of the desert. The area was covered with grass, and as it was their winter home they had set up their gers on the non windy side of a hill. They also raised sheep, although the sheep had gone to the couples son’s place for the winter since it was a better location for sheep in the cold.

One interesting difference between this family and the others that we had seen, besides the camels, was that this family lived in an area without many trees. Because of this they couldn’t use wood to heat their houses. Instead they burned sheep dung. So yes, in our ger we had a big bucket of dried sheep poop that we would soon be burning to keep warm. In case you are wondering, yes sheep dung is surprisingly smokey when it burns.

That afternoon we went to go meet and ride the camels. We have ridden camels before so we knew more or less what to expect. Mongolian camels were different from the ones of Morocco and Egypt though. They are double humped, gigantic, and extremely furry. They to the Egyptian camel are like Wooly Mammoths to an Elephant. This is because the Gobi desert is a “cold desert” and much further north. We learned later that the Camels themselves are an intelligent bunch. In the morning the Herders let them go and they wonder off about a mile to the same field where they graze by themselves. Then in the evening the herder will go pick them up and lead them back to the camp.  Although the camels we were not riding seemed to walk back to the camp without direction, so maybe the leading them part was just because we ere riding them that day. 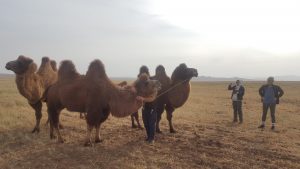 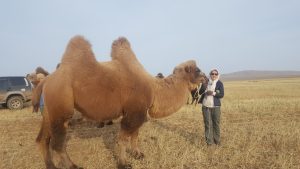 Another difference in Mongolia is how they tame the camels. The camel herd can only have one bull(male) so they castrate the other males. I’m certain this is the same in other areas of the world. The difference is that in most areas we have seen they muzzle camels similar to horses. In Mongolia they put a nose ring in the camel and tie a string to it. I think this is because a muzzle would prevent eating, and unlike in Egypt and such these camels do not have pens. 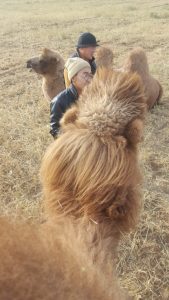 So with that we rode jumped on our camels and road back to the camp. The way to ride these cables is to grab their thick hair for stability, and then to move the reins left or right to steer them. It was very similar to how you ride a reindeer. 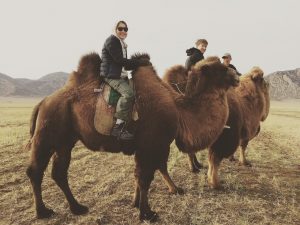 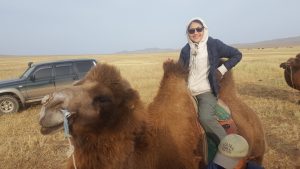 The next morning we were in for a special treat. We woke up to a wailing sound. We walked out side to see 4 people holding down a young camel you had its legs tied together. It turned out the camel had come of age and it was time to do the “administrative work”. This mean castration, where they took a knife and cut off his manhood. This meant branding, where they shaved the fur from around his put, heated a hot iron, and then seared his naked skin with it. Lastly, this meant putting the nose ring into the camel. As he wailed the other camels looked over with a, “been there done that look”. 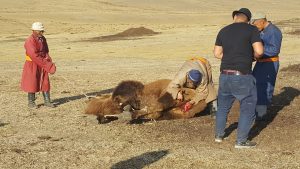 Most surprising is that after it was done the camel stopped wailing, stood up, and slowly walked over to the herd like nothing had happened. It makes me question how other creatures feel pain. One would think the camel would still be hurting. After we walked over the other camels stood up and gathered around him, then they all walked off together to the field to graze. Jessy has a video of this, which maybe we will post later, but I”m afraid I may need to put an age restriction on the blog if we do so for now you’ll have to settle for some pictures.

After this we headed back to Ulaan Batar where we did some shopping, ate some more korean food, and ate some Mongolian pizza, but we won’t be posting about all that. Next entry will be about how we snuck into China.