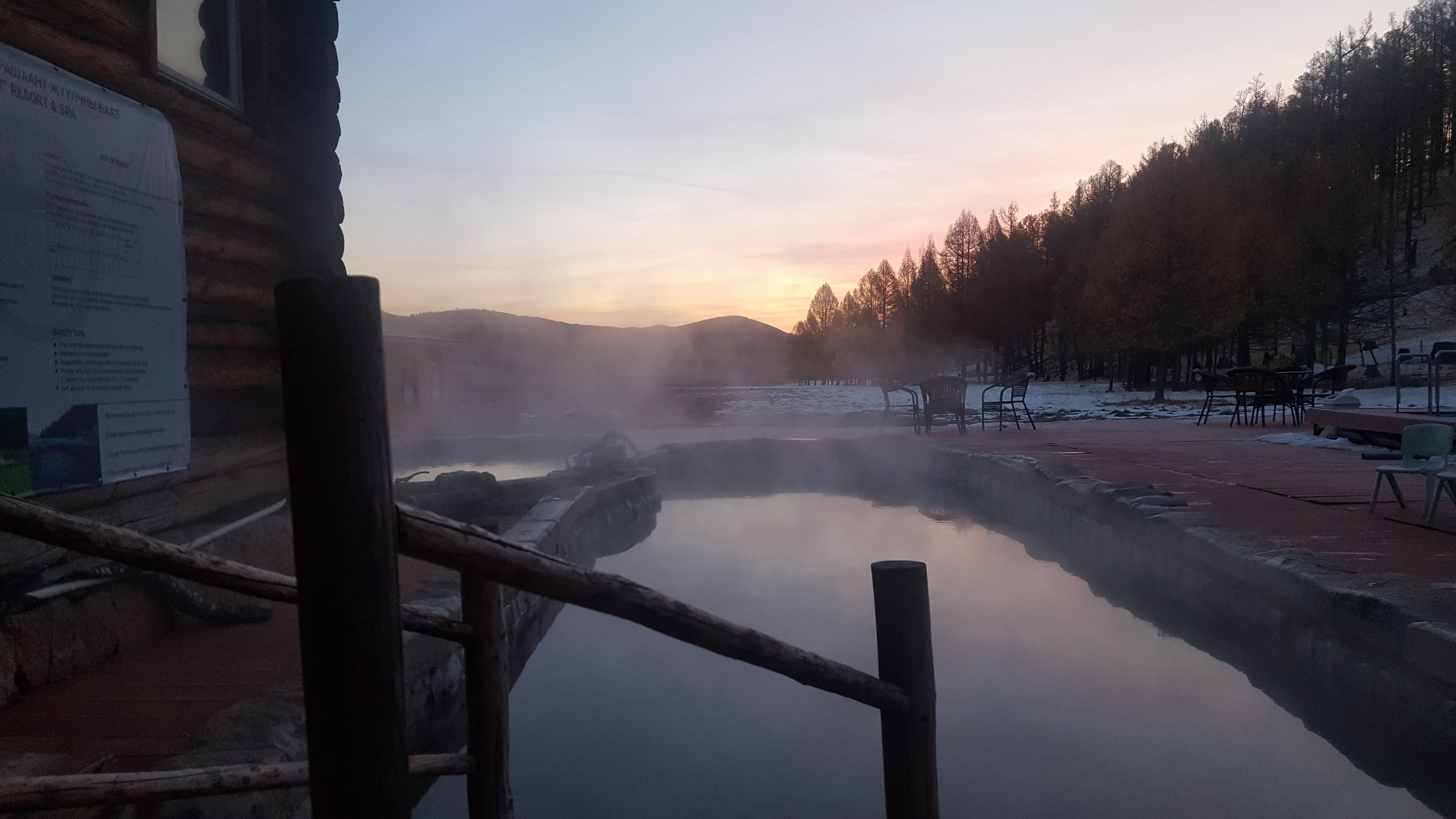 The next day we headed to White Lake. It was a relatively easy drive through out of winter land and through some grassy plains although once we got just north of the lake some of the roads were a bit crazy, aka narrow and steep with a cliff on the right of the car at the base of which was the lake.

After arriving we quickly settled our gers and then headed to the the lake. The lake itself was half frozen. The ice was not thick enough to safely walk on, but it was thick enough to throw stones across. We spent the afternoon walking around the lake, playing on the ice, and watching the sun start to set. One interesting aspect about the lake is there was a solid line of snail shells left on the beach, likely washes up by the tide. All and all it was a lazy evening of lounging, playing cards, and Jessy chasing baby yaks around. Again she failed to catch one, but I must say she has perseverance. 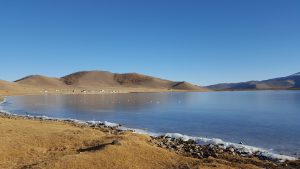 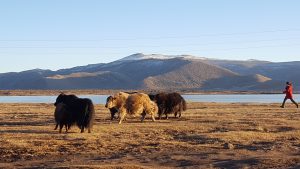 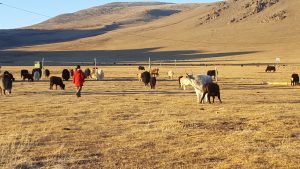 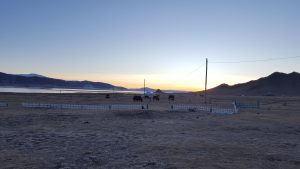 White Lake was partially formed by an eruption and the area we are in now is semi active. The next morning we woke up with the agenda for the day being to go and see the volcano whose eruption created the lake and then to head off to hot springs.

The volcano itself was a mountain of pumas rock in the middle of otherwise flat land. The pumps rock was a variety of colors; green, black, blue, grey, and red. Some of it was sparkling with quartz or other mineral flakes in the rock.  The hike up the volcano took and an hour. Nothing really eventful happened during it. The cool aspect of it was the fact that the volcano cauldron actually looked like a cauldron. Many times you’ll hike up a famous volcano and the top looks like a valley, or worse yet a lake. It was nice that this volcano actually looked like you would expect a volcano to look like.

After hiking down the volcano we headed eastward towards the hot spring resort we would be spending the night. The landscape during much of the drive was different then what we had seen in Mongolia before. The land was strewn with black pumas rock. The eruption that formed white lake had blown ash and stone westward for miles and it still littered the land. Among the volcanic rocks short shrubs grew and there were herds of sheep and horses grazing. Unfortunately all that scenery was on videos, which I don’t have. I do have though a picture of deep river carved gorge we saw along the way. 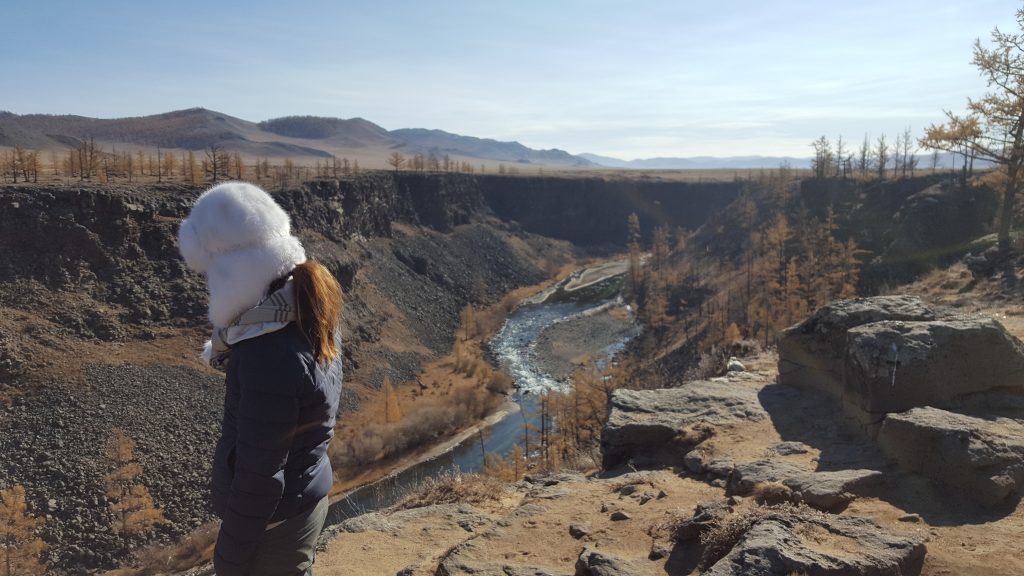 More Mongolian drama occurred when we arrived at the hot spring resort. Long to short the place we had originally booked decided to close, and the place we rebooked told our guides we didn’t have a reservation. After an hour of phone calls and finagling they “found” our reservation and let us in.

The resort itself consisted of two main wooden buildings with rooms. The larger of the two buildings also had a large dinning room that served western food, and changing rooms/ shower rooms for the hot springs. Behind the larger building where two open air baths about 2-3 feet deep and the size of a small pool. One was marked for females, one for males. There was also a large swimming pool that was empty.  The camp also had 12 or so large gets south of the larger building.

We went to our Ger, got unpacked, took a shower and then headed to the hot springs.  Jessy attempted to get into the women’s bath, but it was ungodly hot so she joined us in the men’s.  Also in the men’s bath were a trio of Mongolian wrestlers who were on a retreat. We spent a few hours lounging in the hot spring bath, talking to the wrestlers and enjoying pampering ourselves. 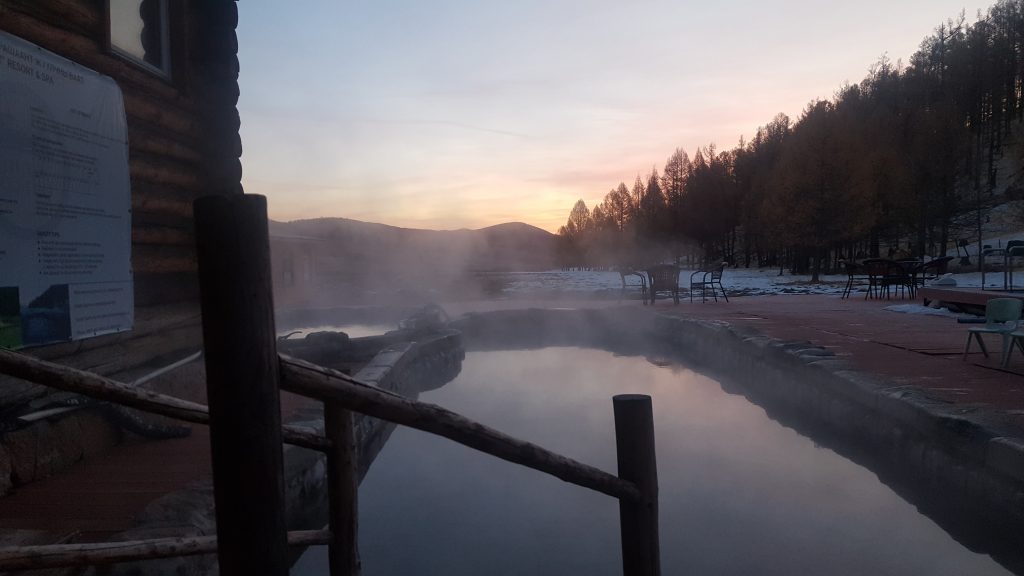 After the bath we retired to the dining room where we got “not lamb” since that’s all we’d been eating for the past 2 weeks. I had a pepper beef dish and Jessy had some chicken wings and fries. 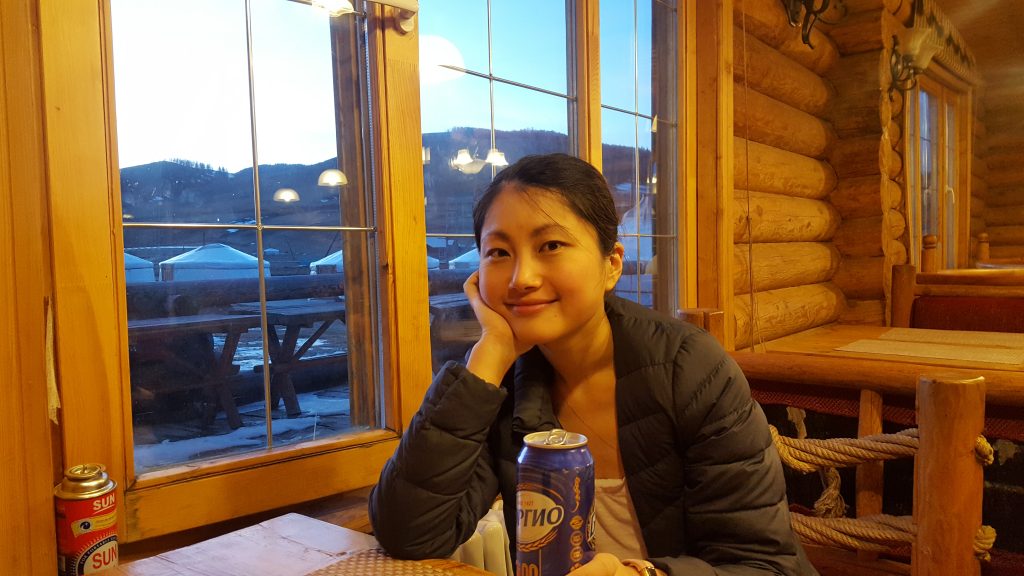 It was a good break. We were clean, refreshed, and ready to continue on toward south central Mongolia