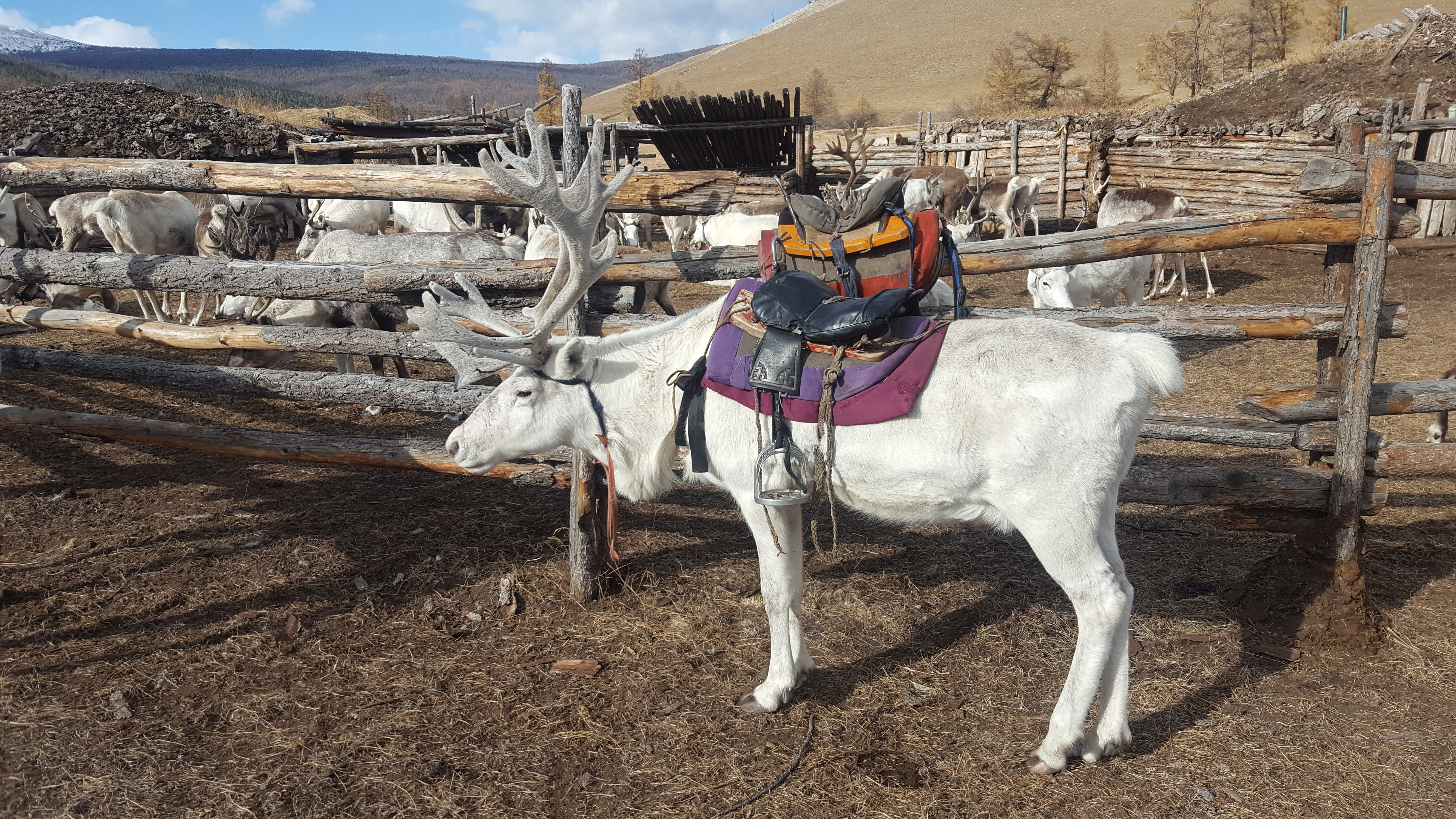 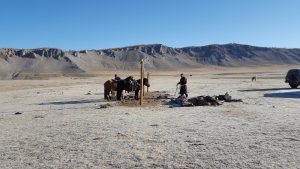 We woke up early. Frost still covered the ground as we packed and readied out horses. Jessy borrowed an overcoat from the horse guides wife since it was cold, and only to get colder in the mountians. We then set out from the horse camp. It was around 9. It was about an hour ride to the “no car” fence, and about 5 hour horse trek from there. We don’t have many pictures from the ride there, but we do have some from the return trip I’ll put in a later post. The reason there is a no car fence is because in the winter it gets to dangerous to drive that road except in an emergency, or if you are local. It s one lane, filled with ice, and has some steep climbs to it. 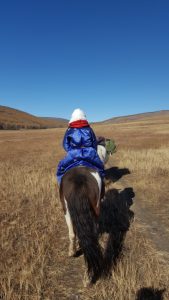 It was our first time riding horses in a while, and Jessy had a bit of bad luck with a less broken horse. Her horse kept running ahead and the guide kept yelling at her to control the horse because it would get tired.  His prediction likely happened because after the “no car fence” the horse would slow down, get about 100 to 200 meters behind the group, then run to catch up and repeat. Around this time we saw two gold foxes,  or maybe wolves, that scurried away up the hills or into the trees.  This, combined with the horses behavior, made the guide concerned that the horse might get attacked so he asked Mogi, our guide, to switch with horses with Jessy. They switched, but Mogi did not have any better luck with Jessy’s horse. My horse was an angle. I’d like to take credit for having full control, but I know a portion was luck and I’d have had a hard time fighting with Jessy’s horse.

The ride up the mountain was beautiful and fun. The horses were trained to stay together, but they allowed more control from the rider then other horse excursions  we had been on. You could drive the horse off somewhere, or force it not to catch up as long as it was reasonably close to the herd and you could get it to gallop, or run. It would stop eventually an let the herd catch up, although sometimes you running would cause the rest of the horses to run if the riders didn’t fight the horses attempt to. In that case the horse wouldn’t have to stop for longer.

After about 4 hours of riding we stopped on the side of a hill that was situated above where heard of 30 or so horses were grazing and had some lunch. Surprisingly horse riding uses a lot of energy, and even though it was cold outside, I found myself stripping down to just my tea shirt at this time. Below are some pictures from our lunch break 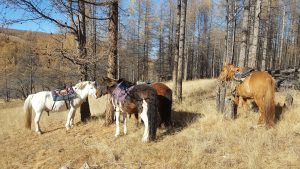 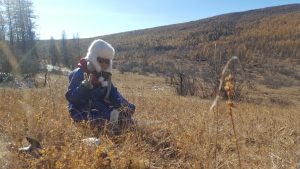 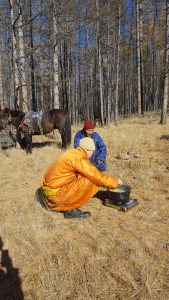 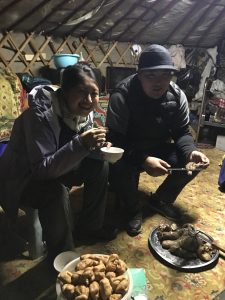 The rest of the way to the camp was mostly downhill and as we got closer the horses speed up. Once we arrived we meet the host family. It was a husband, wife, and young daughter.. likely less than 1 years old. The daughter was wrapped in a blanket and laying in a crib that was hanging from the ceiling. The couple invited us in to their tent, then served us  milk tea and bread, like every Mongolian family. Only this time the milk tea was reindeer milk and it had a sour yogurt taste. The bread was also made with Reindeer milk and also had a sour taste to it. Being from San Francisco I actually found it pretty good. The couple informed us that they would be leaving for the night and should return in two days. An elder had died so they had to go into the town for a funeral. So that sucked, but it meant we got to use their Ger, instead of a cold Tee-pee so that was good and they left us a big pile of firewood.

The reindeer family consisted of 3 Gers. One was the couple we were staying in, south if it was the grandmother’s get who lived by herself, north of it was the reindeer pen where the reindeer stayed at night and got milked, and north of the pen was another ger for a family who worked the reindeer with the grandma and family. That other ger was actually new because the couple there had just gotten married, and when Mongolians get married they get a ger. They were celebrating their wedding so they were not going to the town that night, but they would go in the morning. So we went over to their tent to celebrate with them.

Celebrating meant drinking. Drinking reindeer milk, and drinking vodka. We brought over the bottle of milk vodka we had brought from Ulaan Bataar, and shared it with them. Side not, turns out lots of Mongolians die form Liver cyst from too much vodka. That night provided evidence as we quickly polished off the bottle shot by shot, and moved on to one of their bottles. We learned a few cultural tidbits.  First when receiving a drink, or passing it back use you right hand to pass it, with the left hand of your right on your elbow. Your arms make a 4. Then as you give or take you bow a little bit.  When drinking you make a toast that involves you putting your finger int the vodka and springing some to the earth, and some to the sky as thanks, then you dab a bit on your forehead, and then you shoot it. We drank merrily into the night with the Grandma, newlyweds, and horse guide.

With the Reindeer host couple gone we took one some more aspect of nomad life.  Our first order of business was to get water. We walked down the the river, found a hole in the ice and filled up two large metal containers with water, then hiked it back to the tent. About every two or three hours we would have to go and cut a pile of firewood. It is amazing how quickly wood burns. 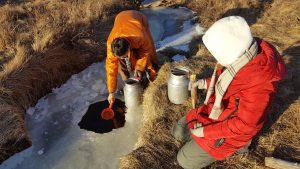 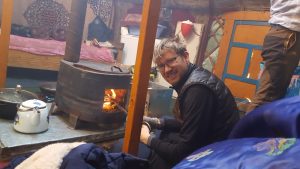 We did not do any of the herding, the grandmother was still around and she herded the cows. The reindeer are less domesticated and basically herd themselves, but the newlywed couple would go find and move them every few hours, or move them back to the pens to milk them.

With all the time we had we went exploring. We walked up through the reindeer herd and took pictures. Many of the reindeer had their heads tied via a rope to the legs to keep it in a grazing position. I think this is to prevent them form running away. You can’t run if you can’t see were you are going. Jessy of course chased them a bit. We next went climbed up on of of the faces of a mountain that was surrounding the valley. We think it was made up mostly of granite and marble. We did a fair amount of mineral hunting, something we did a lot of in Mongolia, and spent hours talking to our guide about his personal life and goals.  That was basically our day; relaxing, walking, watching reindeer.

That night another solo traveler arrived, a guy from Japan. This guy is basically extremely brave or extremely stupid. He is riding his bicycle around Mongolia, A land with miles f nothing, a land with wolves and bears, and most importantly a land with no roads. He also spoke no mongolian, and no english, or korean. The three languages you have the best chance of communicating in in Mongolia. So yeah, I hope he didn’t die. More on him later when I talk about our ride back to the horse camp, but for now.. at this time what was entertaining was listening to the guides try to convince him that he can’t ride a bicycle to lake Bakai from his horse camp. Too far, through the woods, too cold, and too dangerous with wolves.  I don’t know what he ended up doing.

Anyways, after introduction, and attempted intervention we also played hours of cards. We taught the group how to play Bullshit and Egyptian War. They taught us Mongolian poker. Japan ended up kicking our ass at poker so maybe luck is on his side as he attempts his journey.

The next day was basically a repeat of the last, only this time we were the experts and showing Japan the ropes. Here’s how to get water, here is how to chop wood, here is how to play with fire, etc. That was until 2 pm when the host family returned. After that they set up the Teepee so we can see how it works. IT looks just like a native american teepee, and they use pelts for insulation on the floor. The reason they have these Teepee’s is because in the winter they need to clim high into the mountains for the reindeer to find food and survive and it requires them to move every 2 or 3 days. The TeePEe makes that possible, they tear it down, put it on some reindeer, when they get to their new location they can set it up in 30 minutes, start a fire, then have a home. 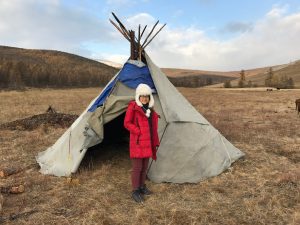 Anyways that was our time with the reindeer people. A great relaxing, yet hard working ancient way of life. Below are some pictures. 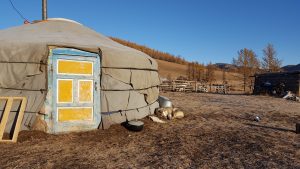 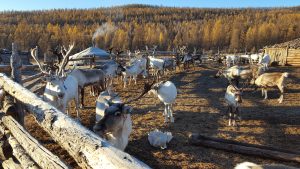 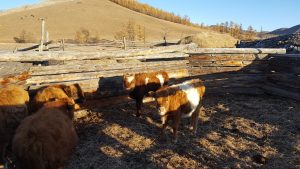 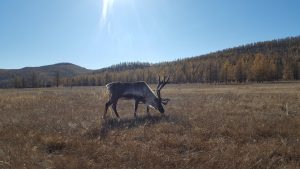 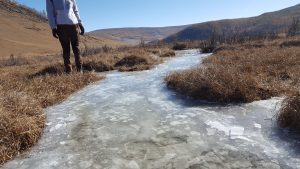 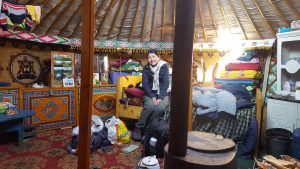 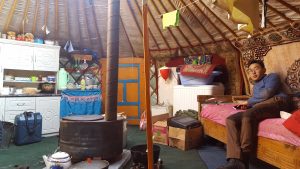 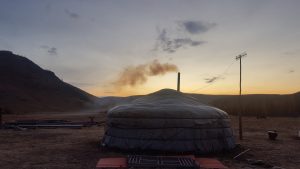 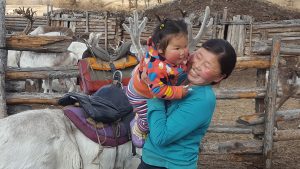 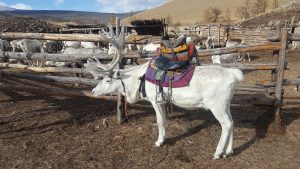 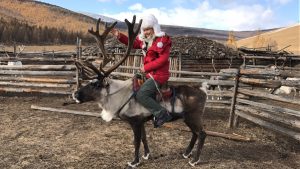 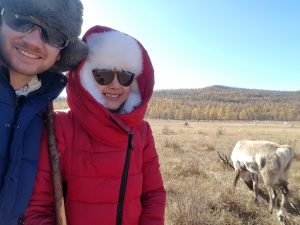 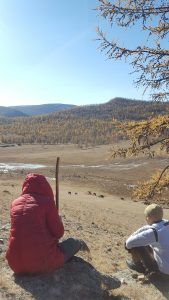 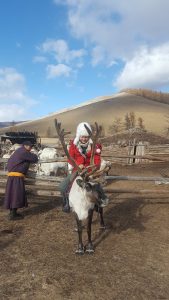