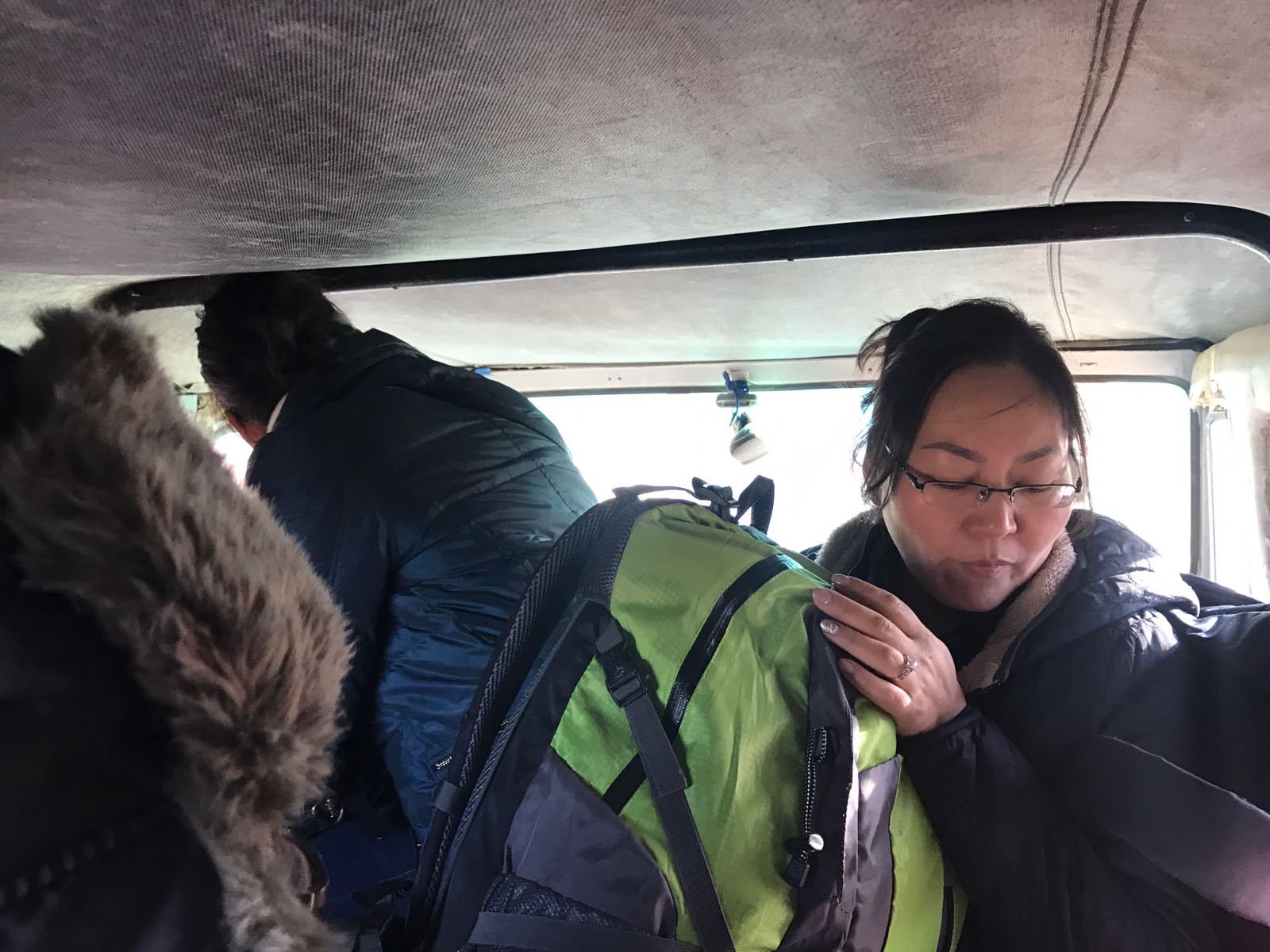 Being backpacking we decided to take a land route across the border to china. The direct route would have been the Orient Express, but the Orient Express did not come through Ulaan Batar on the days we wanted to leave. After a bit of research we discovered that its possible to take a train to the border town of Zamiin- Uud and then hire a car or bus to drive you across the border to Erenhot in China. Cost is relatively low, but it takes some bartering. From Erenhot the plan was to take a train to Beijing.

So the train ride was a nice 10 or so hour trip. We rode in a sleeper car overnight.  It was interesting that we were traveling through the vast near nothingness of the Gobi desert and that the train toilet was literally a bowl with a trap door. When you flushed you could see the ground moving beneath the train. I think that would be eventful to some, but after being in Mongolia poop dropping on the ground anywhere is the new norm.

We ended up in at the border around 8:30 am with a fistful of dollars knowing we needed to save a few for the border crossing fees themself. After getting oriented we made our way to the parking lot to begin bargaining. We quickly learned that the price we had heard before, and had budgeted for was well off the mark of the current market rate. No one would take us. Not only that, they didn’t even try to get us to come back with a lower price when we were walking away. That, in asia, is a sign that your price is well outside the realm of possibility. Even mini-buses and tour buses would not take us for the price we were asking.

After about an hour of asking we finally found a guy said he would take us and he shuttled us over to his jeep. It was a rusted vehicle with the drivers door literally tied on. The were two seats in the vehicle, the front two. The back was basically a flat aluminum-esc floor with two wheel hubs people could sit on, and a raised bump where the trunk door attached that people could sit on. We waited in his truck for about another 30 minutes as he ran off and found more passengers. In the end that small back area was loaded up with 5 people and their luggage.  People were scrunching together and sitting on the luggage.

The drive to the border was short. Initially you cross a security checkpoint to get into the border area; then it is a two mile straight road drive to the Mongolian exit facility. Along this heavily trafficked road were people walking and our driver called out to them. he ended up picking up another three or four more of passengers. We literally had a magic clown car.  At this point I was just trying not to fall out the back door because I’m sure if I fell to hard against it it would break open given the drivers door was held on with an elastic rope.

The Mongolian checkpoint was an easy exit. We exited the clown car, paid a fee, waited in line to get exit stamps, went out the back door, then found and re-entered the clown car. Somewhere in this process the drivers passport gets stamped ( he didn’t have to exit the car). When it was happening for him I observed his book. Pages after pages of Mongolian entry /exit stamps. I wondered how often he has to replace his passport.

The Chinese side was a little more difficult. It started off the same; getting dropped off, going through immigration. Jessy almost got stuck here though. She did not have her Chinese ID on her. Even though she is not a Chinese citizen anymore I guess they want to see that when you enter if you were born in China. After some yelling and begging they let her through. I also had an issue. They asked me something in Chinese, I forget what, and I totally responded as if they had asked me something different. Then they kept asking. I kept responding to the wrong question. Eventually they gave up and let me though.  I realized later my mis-translation.

The second difficulty came when we got back in the clown car. Remember we had 10 -12 people in it. Turns out you can only get into china 5 people at a time so our driver got rejected at the border. We had to turn around and go back to the Chinese immigration building and then our driver went out and begged other cars with less then 5 people to take some of his passengers across the border check point and drop them off just outside the gate. Some 20 minutes later we had it down to 6 people. Jessy and I were not leaving the car because we didn’t know for certain he would actually pick us up again.  For the last one he found a driver whose car had broken down. They decided that that broken car would take a passenger and he would tow the broken car across the border.

Success!! We made it. He picked everyone up and we finally reached Erenhot. We then taxied to the train station and learned we missed the Beijing Train by 30 minutes. After checking out the train map we decided instead to go to DaTong and take a Da-Tong -> Ping Yao -> Shanghai route. Instead of the originally planned Beijing->PingYao->Shanghai. We got our tickets and were on our way!