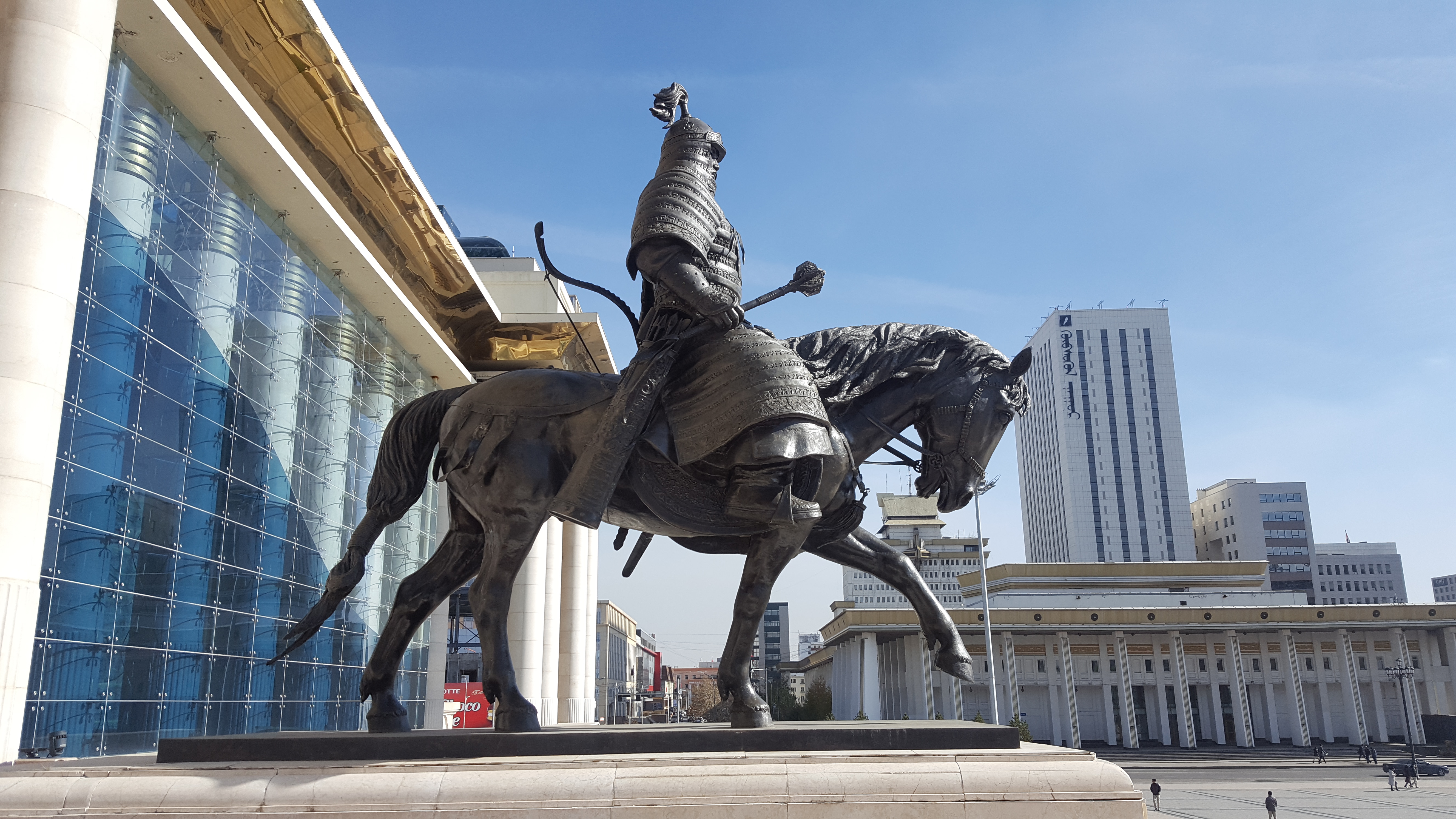 Mongolia has been on Jessy’s to go list for the past two years her since she listened to a pod cast on the history of the Mongols. It is one of the last places on earth where nomads still live the way they have for thousands of years, unobstructed. As such we are both really excited to be here.  Ulaanbatar is the capital of Mongolia. It houses just under one half of all of Mongolia’s citizens, some of which live in tents instead of buildings.  It is located in the center of Mongolia which is on a plains surrounded by mountains. 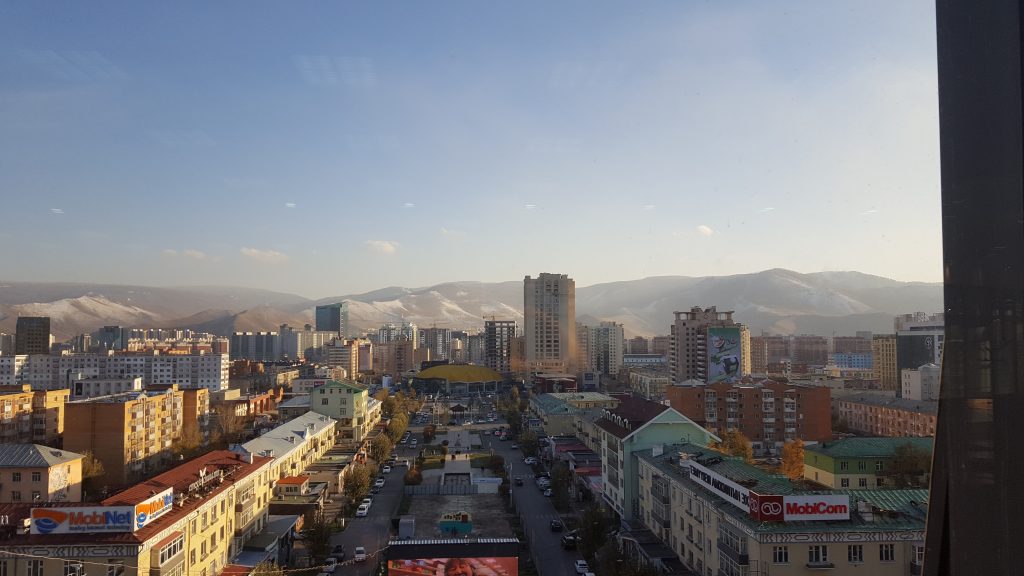 We arrived at the small international airport around 7:00 am. Cabbies in these types of countries like to cheat tourist, and the airport was far enough from the city that  we would get cheated so we opted to take local transportation. We used the airport wifi  to cache google maps for the area as we didn’t have service and then went outside the airport to find a bus station.

To get to the bus station you have to go out the airport door, turn left to walk through the parking lot, then turn right and walk about a quarter of a mile down a dirt path until you get to the main road. The bus station is just to the right of the dirt path. At 7 am there were already 10 or so people at the bus stop. We asked around to get the bus price, watched a bus or two go by, and then decided to just jump on the next bus that was going the correct direction.

The ride itself was reminiscent of my days in China. The bus was crowded. We were standing like sardines, and we put our bags in front of us so we wouldn’t get pick pocketed. At some point Jessy and I got Separated by the strong passenger tides, but we could still call out to each-other to update our statuses. Luckily the tide pushed be in front of the bus stop map. I took out my phone validating the bus  was going towards our hostile, and figured out the bus stop list, where we were, and what stops were near out hostle.  The bus Did not take us exactly where we needed to be, but it ended up being within a half mile or so.

We spent the first three days in Ulaanbatar getting settled, arranging our Mongolia trip with our primary goal being to reach the reindeer people, and preparing ourselves for the journey. We started by going to the local Bazaar and shopping the first day we where there. Being backpackers we try to always carry a minimum of belongings and had been packed for a European fall, but its Mongolia and winter is coming so we needed to prepare. This means buying hats, gloves and for me a proper winter coat. My shoes have also worn through so it meant having to buy a new pair of hiking boots for me as well. I ended up buying camel wool mittens, a puffy faux fur lines heavy blue coat, and a pair of likely fake faux fur lined timberland boots. Jessy opted not to buy a new coat despite my recommending it and bought a pair of long camel fur socks, a fake rabbit fur hat, and a pair of gloves. We look ridiculous, but I think we will be warm.

While at the market we also got our first taste of Mongolian food. We had milk tea, which is the exact opposite of most asian milk teas. Instead of being mostly tea with a splash of milk it is all milk, in this case goat milk, with a splash of tea. Floating inside the milk tea where some dumplings. We also had a lamb and noodle dish that was rather gamey. We would later learn the reason for this is that in the west we eat young lamb; however in Mongolia they think killing young animals is cruel so all of the lamb is old… and gamey. Well not lamb, techically sheep. 😉 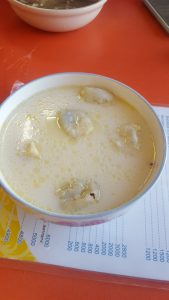 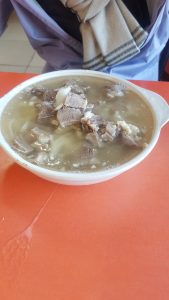 The second day we did some touristy things. We went to the main square which was about 2 blocks away from our hostel. The main square has their city hall and some statues of Genghis Kahn and classic mongol horse warriors. It was a weekend and there were multiple wedding parties taking photographs at the statues. I really wished we would have brought Jessy’s wedding dress and my suit with us and taken shots all over our trip. It would have been cool to have a global wedding album. 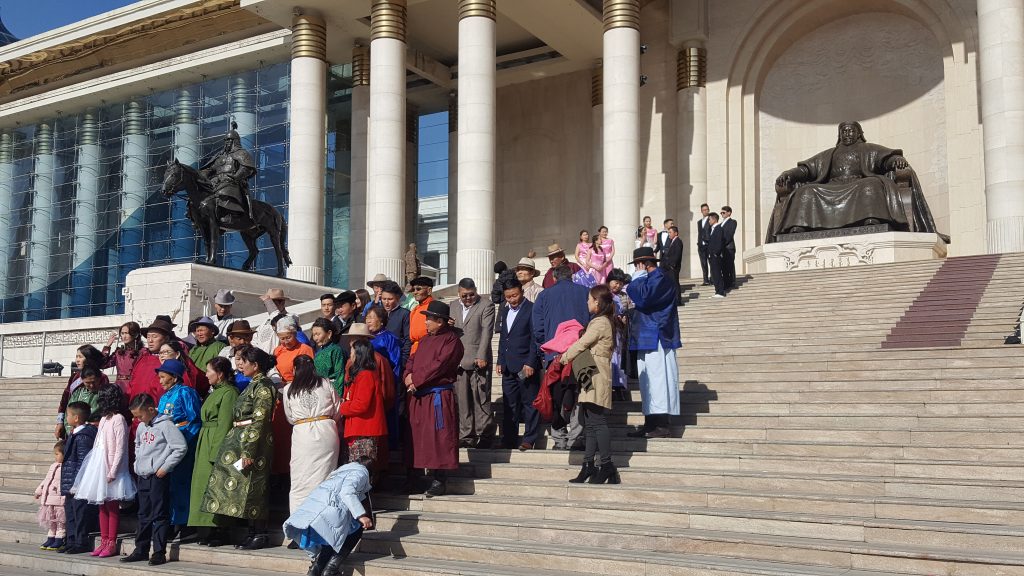 We got a few good shots and then somehow discovered a secret museum that was in city hall. It just opened the day before, and was only open for that weekend. I think they are trying to make a museum that will compete with the main history museum in town, but they are still figuring it out. In anycase, it felt pretty exclusive and random.

We also walked by the North Korean Embassy. Notice Jessy, who did not want to buy another coat is wearing my new coat because she is so cold.  Also notice all the missile propaganda the embassy it showing. Speaking of Korea, there are a lot of north Korean transplants in Mongolia, and with that a lot of Korean restaurants that are run by North Koreans. We had Korean food a few times in Ulaanbater. We did not notice a difference between it and the typical south Korean food that we eat in the states. 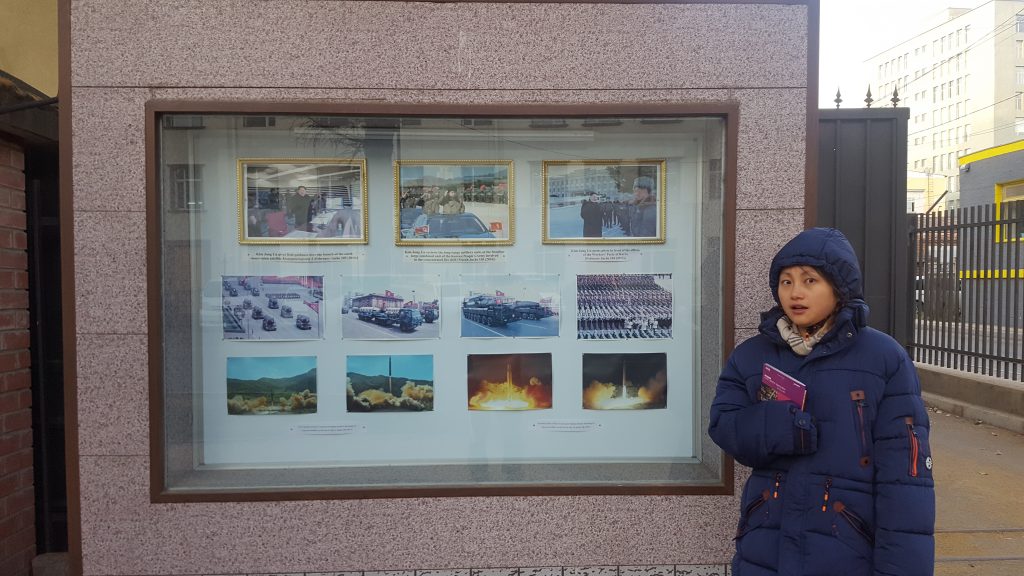 Lastly while in town we arranged our travel with Atlai Adventures. It is after tourist season and on the cusp of winter so it was difficult to find a tour guide group that would take us to the reindeer people, but Atlai was willing to try. The most interesting part of arranging the trip was the payment.Its cash only and Mongolia’s largest denomination bill is 20k which is the equivalent of 10 dollars USD.  We basically had to bring a briefcase of money and enter a car to exchange it. It felt a lot like a drug deal. With the money we got a driver, car, bi-lingual guide, and all the transport, lodging, food, and activities arranged… or to be arranged as we would find out.